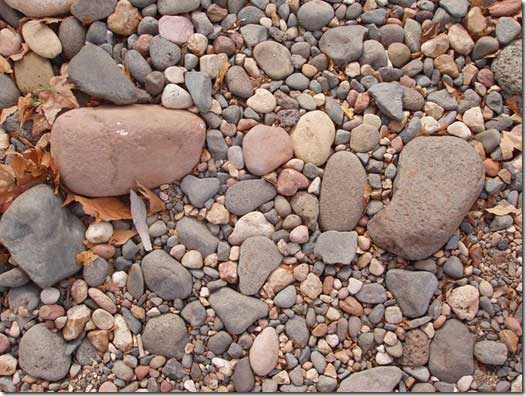 The river rocks that I stopped to gather were smooth in my hand. I’m sure they started out jagged and rough. But the swift current of the cool mountain stream changed that. The strong current, relentlessly shoved the rocks downstream, pushing and tumbling them up and down, around and around, bumping and scraping them against each other until their rough edges were ground smooth. The stones that lay all around my feet had experienced the power of the water, had been shaped and honed by its prodding, pushing and shoving. Now–the water was gone. All that remained of the stream that had once coursed through this valley was a dry river bed of smooth, dry rocks and gravel. The stream was gone. And so were the raccoons, and the deer.. the bears and …the skunks and the coyotes. They were all gone. Oh, they all came when there was water, but when the water dried up, they quit coming.

And so did the human visitors. A few like Wayne and I, all non-residents, that didn’t know the stream was gone, came looking for water.  Only an occasional visitor crunched down the path on the way to somewhere else. We and a few birds, flittering from tree to tree, were the only visitors that day.

When the water was depleted everyone left, everyone except the stone stackers, they stayed. They had memories of way back when, of when there was water. It’s both surprising and amazing how quickly you get used to things. They missed the water at first, but then there were so many stones to stack. And the stacked stones were beautiful. All the colors, and sizes and shapes. Beautiful stones, not that they were valuable, but they were fascinating. Stacking stones is captivating you know. I had to stop and stack a few myself. Amused and interested, I found just the right color and size to stack one on top of the other until it was sufficiently tall to stand impressive without tottering and tumbling to the ground. 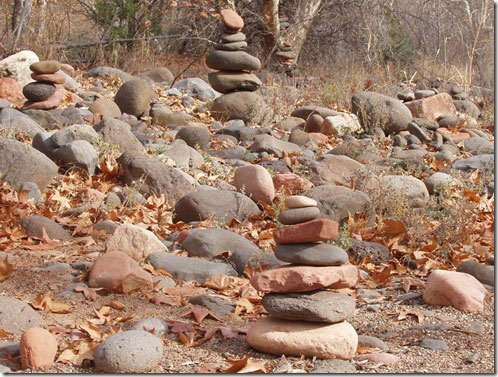 How like stone stackers the traditional Christian has become. They’ve allowed the stream to dry up in their lives because of sin, rebellion, disobedience and unbelief.  It’s not that the stream was never there, it flows from the well of salvation, but neglect has damned the flow of relationship with Him into their lives. I don’t want you to miss this,  indifference, neglect and sin stops the flow of the waters of relationship with God into our lives.

It’s a gradual thing. At first, the change is hardly noticeable. It happens when a believer ignores the still, small voice calling them to surrender their will to His. They hardly notice that the sin that once grieved their hearts, doesn’t really bother them anymore. Modern Christian culture has bought into the lie that conviction makes me “feel” bad, so I will ignore it. They turn up the volume knob on their entertainments. They ignore the warnings and invitations of their loving Father to spend time with Him, to read the Bible, and to obey what it says, with excuses and complaints. The water level gets lower, but they don’t notice cause they are so busy. They are doing beautiful things, churchy things, stacking stones is spiritual you know. Meanwhile, the water of God’s presence in their lives dries up—and they continue to stay where they are spiritually. At first they missed the refreshing, cleansing life-giving waters. But, they got so busy building a church and doing good stuff–stacking stones, that they forgot all about the water. They forget they were called to be water drinkers and water carries– and become satisfied just stacking stones.

Oh, but there’s hope for dry riverbeds and stone stackers.

Elijah was a stone stacker in a time of terrible physical and spiritual drought. There’s a place for stone stackers. But the important issue here is, he didn’t stop with stacking stones. His stone stacking was an altar, a place of repentance…a place of surrender to God. A place where God responded to Elijah’s obedience with fire. It’s important that we notice Elijah didn’t stop when the fire came. He persisted until God sent the rain. Elijah was a stone stacker and a water drinker. He drank from God’s supply. Because he drank from God’s supply, because he wasn’t content to stop with stacking stones, he became a water carrier. His obedience and prayers brought water to a nation. You can read the story in 1 Kings 17.

I’m committed to be a water drinker and a water carrier that stacks a few stones when necessary! How about you? I’d love to hear from you.