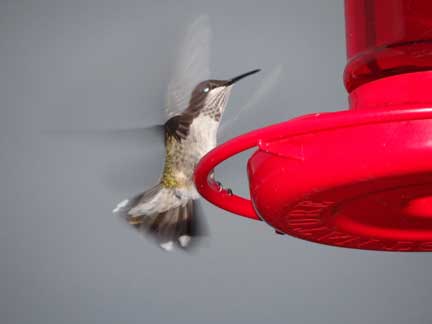 Do you have one in your yard? They are amazing to watch when the visitors are there. I hear them before I see them. I have several feeders. Every spring I fill them with sweet liquid and watch for my first visitor. On their initial visit they will buzz Wayne and I as we sit on the porch before they visit the feeder for the first time. Sometimes their buzz includes a hover just inches away from our faces. Hummingbirds are fascinating. There is something about the tiny bug sized birds that captivates and intrigues even the most casual observer. They seem to stir up an almost paternal concern. They are such sweet little guests.  Little? Absolutely! But let’s consider more carefully the sweet part.

God gave these amazing little birds sword like bills and elongated tongues. Thank you God, for making such an amazing creature. God, you are so good. I enjoy watching them so much. Do you know they can snap up tiny bugs with their tongue? They can, but we know and love them for their appetite for sugar. I can identify with you hummingbirds. Oh, if only sugar didn’t make me fat! 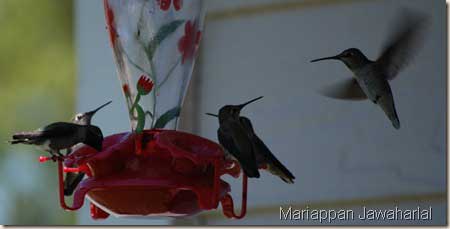 Hummingbirds are little, but they are not sweet. Tom Wood in Smithsonian magazine says, “We’re probably lucky these things aren’t the size of ravens, or it would not be safe to walk in the woods.” It’s almost an oxymoron. How could something that drinks amazing  sweetness from something as beautiful as flowers,  be so hostile? It’s just their nature.

Let me explain to the extent that these birds are definitely not sweet.  If you’ve watched them you know how feisty they can be. I would be tempted to describe them as hateful, little hummingbirds. I can’t count the number of times, I’ve watched an emerald patch glisten in the sunlight as the hummingbird sat on a naked wire that held the feeder on my porch. The hummingbird was watching the red feeder below. The feeder was full of sweet, nourishing liquid. As soon as another hummingbird approached the feeder, the emerald patch exploded toward the approaching bird like a bomber pilot. The persistent guard chased the intruder until it was out of  sight. It’s hard to believe such a loud racket could come from such a little bird. And when he chased that bird away, it returned to the wire to repeat his chase if it or another bird returned.

Most of the time there was more than one feeder. And there was more where that came from. Didn’t the bird know that there was plenty for everyone? Didn’t he realize the master of the house waited on the porch to refill the sweet liquid when the source ran low?  The tiny hummingbird didn’t have to aggressively pursue and attack every bird  that came near the feeder. No, I don’t think it did. It had no concept of the reality that there was more where that came from. But as believers do we know and understand, really understand God is our source? Do you really?

I understand hummingbirds are extremely territorial. It is their way of protecting their territory and their food source. They just don’t know any better. They attack other birds from a mentality, “This is mine. I found it first or I’m bigger than you, so now it’s mine.” They protect and guard their territory with fiery determination.

But selfishness does the same thing to believers. It twists us. God intended that we love others as we love ourselves. But greed twists our thinking to the point we think only of ourselves. When we thinks only of ourselves, our needs, our desires, our ambitions, then we become fighters instead of lovers.

We should know better. And we should do better. How can enjoy such a bounty of glorious, sweet things from the hand of our loving Father and still be selfish?  Often we look like hummingbirds trying to grasp and guard everything we get so tightly that it turns our hearts into burial grounds instead of a river flowing out to others.

Proverbs 28:25 “Greed causes fighting; trusting the LORD leads to prosperity.” Whether its money, possessions, a ministry or a church? A greed mentality is dangerous. Greed or trust? We choose. Actually, we choose everyday. Greed? Trust?

It’s written on our coins, “In God we trust.” But do we? Or does our fear drive us to territorial greed that keeps everyone out and everything there inside. A burial ground instead of a river. Not a pretty picture, especially for a believer that is supposed to look like Christ!

The hummingbirds will be gone soon. I hate to see them go. But I’m thankful for the things they’ve taught me. I hope I’ve learned enough to do different.

Talk to me friends. In a culture of iPhones and iWant how do you fight greed?