Skip to content
The 2012 Olympics are history. The US Team once again ranked highest medal count with 104 medals- 46 of which were gold. Their successes fed our national pride. Our glimpses of the powerful swimmer, here Michael Phelps, the amazing and adorable Gabby Douglas and the incredible perservance of Manteo Mitchell, running his portion of the relay with a broken leg, are national treasures, at least for this American.
My encounter with the 1996 Olympic Flame in Jacksonville left me with a lifelong interest in the Olympic Flame. Out for that encounter I compiled a workshop called Carrying the Torch. And because of my interest in the Olympic Flame, one of my greatest memories from the 2012 Olympics will be that they let the Olympic Flame go out.

Extinguishing the Olympic Flame is a huge NO NO!

As believers we must not allow our light to go out.

We must keep Him number one, central in all we do.
We must move our relationship with Him from being a church thing, to taking Him with as we live out everyday life.
Asking Him for direction.
Listening to His gentle warnings and course corrections.
Talking.
Listening.
Obeying in every arena of our lives! 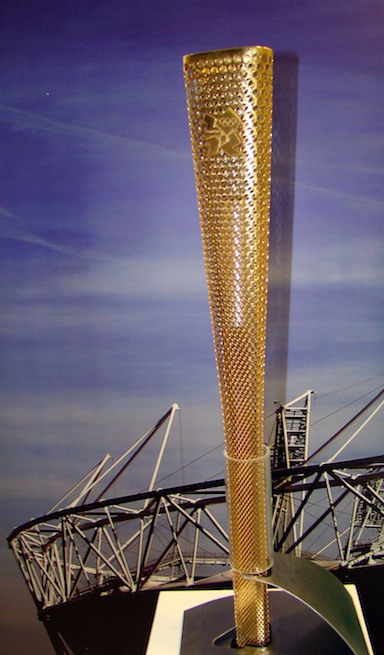 The second reason I will remember the 2012 Olympics, is the final location of the cauldron is not where people could see the flame.
You couldn’t see the flame unless you had a ticket inside the stadium.
Can’t see the flame without a ticket?
You’ve got to be kidding me, really?

And too many church members have bought into the same mentality of the Olympic organizers.

Let the world come to us. Build it and they’ll come. Well they haven’t come, because the light is what draws them.
Jesus said, “if I be lifted up I will draw all men to me.” John 12:32
We’ve embraced the mentality, let me get the world into the church, so they can see Jesus.
That’s backwards.

We must realize, we are the church.

We are jars of clay, lamps, lit and shining for the world to see the light of Jesus Christ.
And the sad truth is, they probably won’t see Him at church, if they don’t see Him in us.
People will want to come to church with they see how wonderful, powerful and loving Jesus is by seeing His reflection in our lives.
I’m talking about more than being a nice person, however, being nice is a good start.

The world needs more than nice people, they need Jesus.

We need to be full of Jesus, so people see Him in us.

But that comes with spending time with Him.

Loving Him.
Obeying Him.
Serving Him.
My suggestions:
A: ask God to help you love Him and people more. Ask God to ignite your spiritual passion.
B: be a servant, in little ways by doing little things.
C: see, ok, it doesn’t start with the letter “c”, but you’ll remember it now. See through the eyes of Christ. See opportunity.
D: do the works that you see Jesus doing. He promised we would.
You can read the account yourself of “When the Torch Went Out”
And my hope is that you’ll never let your light go out!

Please Let Me Run!
Are You a Door For the King of Glory?
Need a FAITH lift?