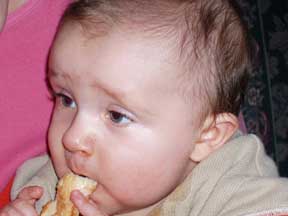 Little babies grow fast. To a nursing mother it can seem like they want to eat all the time. Often, a healthy baby will initially want to eat every two hours, and then every four hours. A baby often doubles its weight in about four months. But some babies have what is called “failure to thrive.” These babies, for a myriad  of reasons either don’t want to eat, can’t eat or can’t utilize what they do eat. And because they are malnourished, they don’t gain height or weight that is normal for babies.

One of my relatives cared for a baby that had “failure to thrive”. The baby was born with a very serious heart condition. It had undergone surgery twice and should have been on the road to recovery, but she wouldn’t eat. While most babies slurp their bottle quickly and noisily, this little one didn’t even want to suck. She would have to be awaken at feeding times and then rubbed and patted to keep her awake. Her care giver would coax her awake, talking and jiggling and moving the bottle nipple in the little girl’s mouth. The tiny bundle would suck briefly and then lie listlessly. It would often take 45 minutes to an hour to get the baby fed. She simply had no interest in eating. After an extended battle, the baby developed an appetite and began to develop and grow.
Failure to thrive can be a very serious situation. A baby’s brain grows as much in one year as it will the rest of its life. If the baby is malnourished, brain development can be permanently affected. According to Nemours, KidsHealth.org, some adverse effects are :
The Apostle Paul diagnosed believers with a similar condition in 1 Corinthians 1:1NLT “Dear brothers and sisters, when I was with you I couldn’t talk to you as I would to mature Christians. I had to talk as though you belonged to this world or as though you were infants in the Christian life. I had to feed you with milk and not with solid food, because you couldn’t handle anything stronger. And you still aren’t ready,” 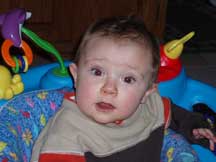 Paul is saying,
“You’re not growing. You’re not developing.”

(And baby Brayden, seems to be saying, “Not me? I love to eat!” And I’m right there with you, Brayden. I love to eat too!)

Spiritual development is essential in the life of a believer, but when we don’t nourish our spirits with adequate amounts of God’s Word we experience the adverse effects of “failure to thrive.”
It’s time to grow up!

Hebrews 6:1 NLT So let us stop going over the basics of Christianity again and again. Let us go on instead and become mature in our understanding. Surely we don’t need to start all over again with the importance of turning away from evil deeds and placing our faith in God.

Hebrews 5:14 NLT Solid food is for those who are mature, who have trained themselves to recognize the difference between right and wrong and then do what is right.

To Grow Up there are prepostions that we need to nurture.

Get a growth strategy. Establish a time and a place for daily Bible reading and study. It’s an essential part of Christian Growth!
Need a FAITH lift?