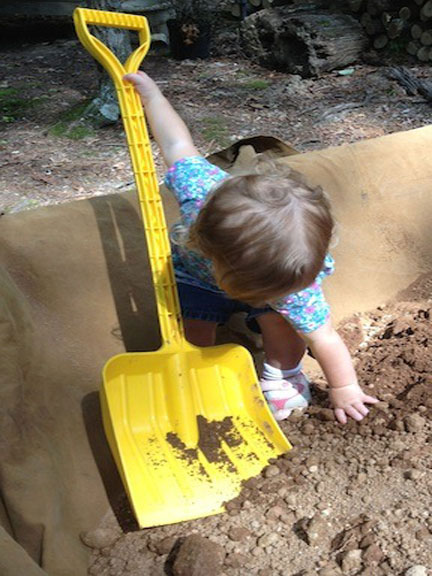 Keira has that same mentality. We were unloading a trailer of fill dirt, when Keira found her shovel and joined us. She picked the dirt up by the handfuls and dropped it onto the shovel.

She’ll learn. And while I have accomplished a lot by diving in and just doing it, I have also discovered there are benefits that come with increased knowledge.

As a little girl I didn’t know anything about prayer, I just talked to God relationally. I prayed for my dad. I prayed about school. I just did it. I talked to God like I would my best friend. It was conversational. It was precious time that shaped my life.

Later, I discovered examples and clues in Scripture that enriched my prayer time. My prayer was still relational, but I realized there was more to prayer.

I still talk with God about everything, but I also enjoy other kinds of prayer too.

Let me explain. Most of us know a lot about asking God for things, that’s the “Prayer of Petition.”

The Bible gives us a firm foundation for asking boldly and expecting results. But that’s only one kind of prayer.

And like a cook that is given an unfamiliar spice, we struggle with how to use different types. Without embracing and practicing the different kinds of prayer, our prayer time can lack depth and scope.

My intention is not to merely put a name on a type of prayer, but enrich your prayer life to include different types of prayer, so you will operate in them with authority, confidence and boldness.

Prayer- As a believer we each have a right and a responsibility to pray.

No, He said, “When you pray.” Prayer is a right and a responsibility of every believer.

It is a privilege to pray.

As His child you can enjoy all the benefits of belonging to God’s family.

You have access into the very presence of God. That’s a life changing truth!

We have access not because we earned it, but because Jesus paid the price for our sins.

We are instructed to pray for our needs and also the needs of others.

“1 Timothy 2:1 NIV I urge, then, first of all, that requests, prayers, intercession and thanksgiving be made for everyone–”

To intercede for someone is to make earnest, heartfelt requests for them. That kind of praying continues until you feel in your spirit you have touched heaven or until the answer arrives.

We get a glimpse of intercession in the story of the widow woman and the unjust judge in Luke 18:9-14. She wanted to save her son so she interceded for him.

When you realize you have a dog in the fight, you’ll intercede.

No, really. I know this is a crude analogy, but when you’ve got a dog in the fight, you care about the results, otherwise you don’t care.

Every believer has a dog in the fight, so to speak, because we are part of a family of believers.

Family is important! We take care of family and that includes interceding or taking someone else’s need to God in prayer.

Let me explain with a story from Bruce Wilkerson’s powerful book “Beyond Jabez.” He tells about going into a stadium arena early for a Promise Keepers event where he found a small group praying. The presence of God was so real that he slipped into a seat behind the group and waited until they finished. They explained that they were a part of a group of churches in that city that had been praying every Friday night for a hour and a half for the last year for this event.

Why did they pray so hard for so long?

It wasn’t their event!

It wasn’t held in their church.

They weren’t getting paid.

They prayed because they cared.

They cared because they connected with God.

In that connection they began to care about the things God cares about.

They saw His heart. They saw a glimpse of what God wanted to do with an upcoming men’s event in their city. They got it.

God’s vision rubbed off on them. They began to partner with God through prayer for His will to be done.

James 4:2b “And yet the reason you don’t have what you want is that you don’t ask God for it.”

Ask God to stretch your vision to include others.

Ask God to stretch your faith.

Maybe that stretch will be gradual, but keep hanging out with God.

Keep asking God to meet your needs, but then pause long enough to expand your prayer to include, “Father, who do you want me to pray for?”