I can’t begin to imagine the fear that must have permeated every crevice of Ravensbruck. Could her faith work there? Could Scripture penetrate the walls of hatred in that horrendous place. Let’s take a look at Scripture first.

1 John 4:18 KJV There is no fear in love; but perfect love casteth out fear; because fear hath torment. He that feareth is not made perfect in love.

I can’t help but approach this verse as a food lover. It’s like tasting something so wonderful that you have to ask the cook, what’s in this…and with a broad grin the cook explains, well most folks put allspice in their’s, but not me…I put cinnamon.

John is telling us what is not in love.

fear has torment (you know that’s true) so there’s none of that is in God’s love.

Phillips Christian love—the highest and best gift
13 1-3 If I speak with the eloquence of men and of angels, but have no love, I become no more than blaring brass or crashing cymbal. If I have the gift of foretelling the future and hold in my mind not only all human knowledge but the very secrets of God, and if I also have that absolute faith which can move mountains, but have no love, I amount to nothing at all. If I dispose of all that I possess, yes, even if I give my own body to be burned, but have no love, I achieve precisely nothing.

4 This love of which I speak is slow to lose patience—it looks for a way of being constructive. It is not possessive: it is neither anxious to impress nor does it cherish inflated ideas of its own importance.

5-6 Love has good manners and does not pursue selfish advantage. It is not touchy. It does not keep account of evil or gloat over the wickedness of other people. On the contrary, it is glad with all good men when truth prevails.

7-8a Love knows no limit to its endurance, no end to its trust, no fading of its hope; it can outlast anything. It is, in fact, the one thing that still stands when all else has fallen.

“…and in my life everything had fallen.”

Even if you have read the hiding place please hear my heart and for that reason I ask you to go to my podcast. Believe me, this podcast is worth listening to.

She was born again when she was 5 years old…those kind of stories absolutely thrill my heart. As soon as she got saved she realized that the people that lived on the street behind her were living in darkness without Jesus, so she began to pray for them. I can’t share that point without emphasis the prayers of a 5 year old are not cute…they are powerful. Never underestimate them. Her family read the Bible together every morning and every evening at the end of their meal.

A simple but full life.

She was the first female licensed watchmaker in all of Holland. She and her sister Betsie never married and lived above their shop with their father. They lived a simple but full life. They were a hub of activity with people constantly stopping to for a friendly chat. They raised foster children. Corrie taught and nurtured children with mental and physical disabilities.

A terrible war was going on that history calls World War II. Holland was neutral in the first World War and also the second, but May 10, 1940 Holland’s Prime Minister assured all of Holland that they were neutral and there would be no war in Holland. Within hours airplanes dropping bombs were being heard at Germany attacked Holland.
Holland was no match for Germany’s strong army, so the war was over in days.

The first year of German occupation was bearable for people that fit Nazi’s Aryan qualifications. That description included many of the Dutch bloodline. Those that did not fit within the elite guidelines, the elderly, people with mental and physical disabilities and the Jewish people were deemed “undesirables.” Slowly the opinions and mindsets of the Dutch people began to change as the lies of propaganda pounded their senses with intensity and frequency.

The Jewish people were registered and required to wear a yellow star. The power and privileges of more ration cards, better jobs, coupons for clothing were given to members of the National Socialist Bond swelled feeding Anti Semitism and hatred for the “undesirables.” As the people wearing yellow stars disappeared, at first a few at a time, members of the NSB moved into their homes. The NSB became the agency addressing Holland’s own “Jewish Problem.”(I can hardly write those words.) Just as in Germany, terrorizing the Jews became public policy.

How does kind, loving people forget that every person, every person is made in the image of God. How do such gentle, kind people become filled with such greed and hatred? The answer is obvious; they believed the lie they were hearing.

Lies are swirling all around us. Truth is critical. It is worth pursuing, digging out! Believing lies can kill 11 million people.

I’m not saying everyone believed the lie, there were some that simple shut their door, pulled down their window shades and did nothing.

But not the ten Boom family, their love for God had to find a way to protect their Jewish brothers and sisters. God helped them and they were able to save around 800 Jewish people.

They poured their lives into loving until they were betrayed…

let me tell you how God turned her horror story into a love story. Go to 11:30 in the podcasts to pick up at this point in the story.

Listen to the podcast here. 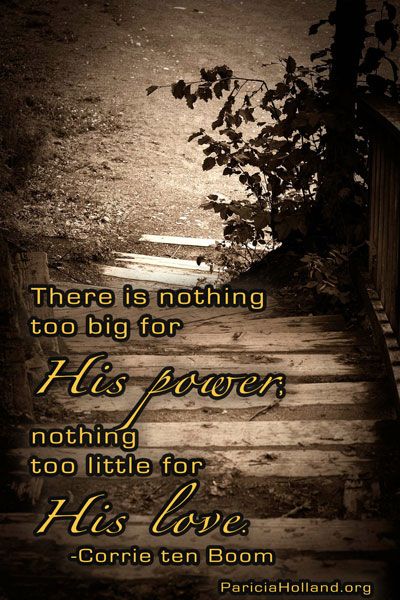