Are you a door for the King of Glory? I’ve asked you stranger questions before… but, seriously, this has got to rank up there with one of the strangest questions– Are you a door for the King of Glory? So let me tell you a story before you answer my question. He had failed once, but he wouldn’t make the same mistake again. His intentions were good; no, his intentions were absolutely what should have been done, even before he became king, but the way he did it was wrong. He wanted to bring the Ark of the Covenant home. The ark represented the presence of God and if Israel was going to be the nation God intended, His Presence had to be in the center of all they did.

He had a new cart built, just like the Philistines had done when they returned it. (That is one of my all time favorite stories to tell. I want to share it with you soon.) When The Ark was loaded in the back and they started home. (1 Chronicles 13:7) The party was on! What a celebration! Singing! Musical instruments! Laughter!

Everything went as planned until the oxen stumbled. Trying to keep The Ark from falling out of the cart, Uzzah touched The Ark and he died instantly. The party was over! King David was NOT a happy camper. The Ark was left at Mr. Obededom’s house while King David tried to figure out what to do next.

He did it God’s way!

God required that The Ark of the Covenant be carried on the shoulders of the priests. So King David’s first priority was to insure that the priest prepare their hearts to carry The Ark. He organized every detail of the event and according to MacLaren Expositions Of Holy Scripture even wrote a song for the occasion.

The first part of the song was a chant…

sort of the prelude to our modern day rap…maybe? At any rate they probably repeated the words in a rhythmic chant as they wound around and up; higher and higher as they approached the entrance to the city. They echoed words that described what kind of person could access the presence of God. Talk about interactive learning! They chanted powerful words; life changing words that can still change hearts. (Psalms 24:1-6)

Then they probably (according to articulate Mr. Alexander MacLaren) stopped in front of lofty, towering gates, and ancient doors now “grey with antiquity” that prevented their entrance into the holy city. These were possibly the same gates that Melchizedek , the King of Salem had gone through to greet Abraham as he returned with the spoil of battle. But in David’s song he personifies these magnificent gates that is recorded in Psalms 24:7-10. (Wouldn’t it be wonderful if we could actually hear that recording of David’s choir? Or would we be put off by the style of music and miss his message completely because the tune didn’t fit our taste?)

Lift up your heads

One half of the choir sings to the gates, “Lift up your heads, you gates; be lifted up, you ancient doors, that the King of glory may come in.” This is how I hear his message to these gates. “Hey gates, lift your head that is sagging with worry and weariness. Lift it up! Open your eyes, open your heart because the King of Glory wants to enter.”

Who is this King of glory?

The other half of the choir answers defiantly and forcefully, as if speaking for the gates, “Who is this King of glory?” The first choir answers with regal confidence, “The LORD strong and mighty, the LORD mighty in battle.” They use His covenant name, Yahweh, (Yhvh) the proper name of the God of Israel. Then they repeat their admonition with conviction and passion. “9Lift up your heads, you gates; lift them up, you ancient doors, that the King of glory may come in.” These gates may have had many kings pass through them, but none like the King of glory!

Doors have a job to do.

It’s the one job that has been assigned to the doors, to keep predators, thieves and murders outside, while giving citizens and guests that belong their due access. So the second choir repeats their question, “10Who is he, this King of glory?” And the first choir answers with a expanded explanation, “The Lord Almighty—he is the King of glory.” Another version says “The Lord of Hosts” and one says “The LORD of the armies of heaven.” 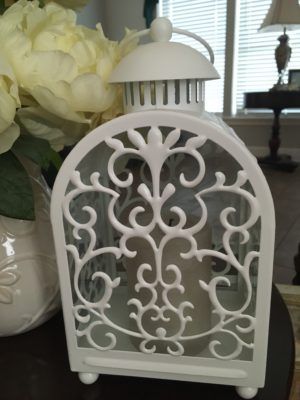 I have a beautiful lantern that Kimberly gave me one day—a “thank you” token. Something to say “I love you.” It is a beautiful white, ornate lantern with a hinged door. It was made to hold a candle. While the lantern is beautiful and it is designed for it’s beauty, it will never fulfill it’s purpose until I open the door and place a lighted candle inside. 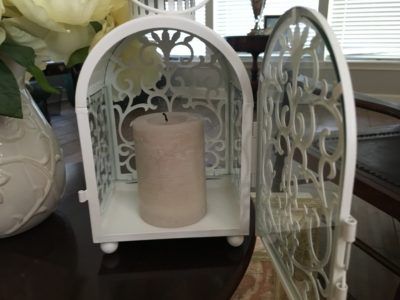 You my friend are a door…an opening…

a door to receive God’s Glory and reflect His glory!

And if you open the gates of your heart, the king of glory will come in! He will pour His light…His life…His love into your heart. Another miracle of this story is… You are also a door for Him to pour His love through.

But the question is…do you believe that?

Do you believe that you are a door in your…

for the King of Glory to pour His love through?