Samaria, the capital of Israel’s northern kingdom, was under siege. Ben-hadad, the Syrian king and his powerful army’s presence had resulted in a disastrous famine.

You can listen as you read.

Israel’s king was walking along a wall when a woman cried out to him for help.

His answer expressed his sense of utter helplessness.

I quoted from the New Living translation, but the Aramean is translated in most places as Syrian.

He answered, “If the LORD doesn’t help you, what can I do? I have neither food from the threshing floor nor wine from the press to give you.” 28But then the king asked, “What is the matter?”

She told a story of cannibalization that drove the heartbreaking truth of desperation like an arrow into his heart.

30When the king heard this, he tore his clothes in despair. And as the king walked along the wall, the people could see that he was wearing burlap under his robe next to his skin.

In the Bible, whenever someone sought God with ardent desperation through prayer and fasting, they would put on burlap as a sign of their humility.

31“May God strike me and even kill me if I don’t separate Elisha’s head from his shoulders this very day,” the king vowed.

I can only guess at why the king would blame Elisha for this nightmarish situation, but Elisha wasn’t the problem. Playing the blame game started with the first sin and has been repeated again and again when a person is confronted with a problem or a sinful consequence. You can’t win shifting the blame. The king backed up his vow with a personal visit to Elisha’s house and his personal assistant.

32Elisha was sitting in his house with the elders of Israel when the king sent a messenger to summon him. But before the messenger arrived, Elisha said to the elders, “A murderer has sent a man to cut off my head. When he arrives, shut the door and keep him out. We will soon hear his master’s steps following him.”

33While Elisha was still saying this, the messenger arrived. And the king said, “All this misery is from the LORD! Why should I wait for the LORD any longer?”

1 Kings 6 describes the scarcity of food by explaining what is available and how expensive it is; the price of a donkey head cost 80 pieces of silver and a cup of dove’s dung for 5 pieces of silver. In the midst of this kind of scarcity Elisha announces the availability of choice flour and barley grain. But not just availability, he is also communicating that the flour and barley will be available in abundance by telling how much it would cost…6 quarts of fine flour or 12 quarts of barley grain for 1 piece of silver.

2The officer assisting the king said to the man of God, “That couldn’t happen even if the LORD opened the windows of heaven!”

But Elisha replied, “You will see it happen with your own eyes, but you won’t be able to eat any of it!”

3Now there were four men with leprosy sitting at the entrance of the city gates. “Why should we sit here waiting to die?” they asked each other. 4“We will starve if we stay here, but with the famine in the city, we will starve if we go back there. So we might as well go out and surrender to the Aramean army. If they let us live, so much the better. But if they kill us, we would have died anyway.”

What a hopeless situation! Or so it seemed.

That was really true. If they sat where they were they would die! It was hopeless ONLY if they did nothing. They had no idea what God would do.

5So at twilight they set out for the camp of the Arameans. But when they came to the edge of the camp, no one was there! 6For the Lord had caused the Aramean army to hear the clatter of speeding chariots and the galloping of horses and the sounds of a great army approaching. “The king of Israel has hired the Hittites and Egyptians to attack us!” they cried to one another. 7So they panicked and ran into the night, abandoning their tents, horses, donkeys, and everything else, as they fled for their lives.

I just love this part of the story!

This is a perfect picture of a boomerang. Intimidation had been a powerful tactic of this army, now God was using sound to intimidate them.

Please dear friend, stop allowing intimidation to stop you. It is a strategy of hell to stop you from doing what God has called you to do;

to keep you from believing God for your family;

to rob you from the victory God has promised you.

I want to remind you that no weapon that is formed against you will prosper.

8When the men with leprosy arrived at the edge of the camp, they went into one tent after another, eating and drinking wine; and they carried off silver and gold and clothing and hid it. 9Finally, they said to each other, “This is not right. This is a day of good news, and we aren’t sharing it with anyone! If we wait until morning, some calamity will certainly fall upon us. Come on, let’s go back and tell the people at the palace.”

10So they went back to the city and told the gatekeepers what had happened. “We went out to the Aramean camp,” they said, “and no one was there! The horses and donkeys were tethered and the tents were all in order, but there wasn’t a single person around!” 11Then the gatekeepers shouted the news to the people in the palace.

12The king got out of bed in the middle of the night and told his officers, “I know what has happened. The Arameans know we are starving, so they have left their camp and have hidden in the fields. They are expecting us to leave the city, and then they will take us alive and capture the city.”

13One of his officers replied, “We had better send out scouts to check into this. Let them take five of the remaining horses. If something happens to them, it will be no worse than if they stay here and die with the rest of us.”

14So two chariots with horses were prepared, and the king sent scouts to see what had happened to the Aramean army. 15They went all the way to the Jordan River, following a trail of clothing and equipment that the Arameans had thrown away in their mad rush to escape. The scouts returned and told the king about it.

17The king appointed his officer to control the traffic at the gate, but he was knocked down and trampled to death as the people rushed out.

So everything happened exactly as the man of God had predicted when the king came to his house.

What are we missing out on because we don’t believe?

The king’s assistant missed out on the food, the bounty that the army left and his life.

Who hath believed our report?

and to whom is the arm of the LORD revealed?

John 12 tells us the story of an excited crowd that greeted Jesus as he rode into Jerusalem on a donkey. Verse 17 explains that many of the people in the crowd had seen Jesus call Lazarus from the tomb and raise him from the dead. They were telling others what Jesus had done, so crowds of people wanted to see Jesus too.

In this context Jesus prophesied his death; then He exposes his heart in verse 27. “Now my soul is deeply troubled. Should I pray, ‘Father, save me from this hour’? But this is the very reason I came!

28Father, bring glory to your name.” Then a voice spoke from heaven, saying, “I have already brought glory to my name, and I will do so again.” 29When the crowd heard the voice, some thought it was thunder, while others declared an angel had spoken to him.

30Then Jesus told them, “The voice was for your benefit, not mine.

God spoke from heaven to benefit them, to bolster their faith, to reveal Jesus to them. Part of the crowd explained it away as thunder. I’ve heard people explain way God’s miracles.  Some of the more religious people passed it off as an angel speaking to Jesus. It was God, but many didn’t get the revelation of who Jesus was because they didn’t believe.

Verse 37, But despite all the miraculous signs Jesus had done, most of the people still did not believe in him. 38This is exactly what Isaiah the prophet had predicted:

“LORD, who has believed our message?

To whom has the LORD revealed his powerful arm?”

Do we believe something simply because it is frequently repeated?

Do we believe something because it sounds right to our ears?

Or do we believe it because it IS TRUTH?

John 14:6 NIV
Jesus told him, “I am the way, the truth, and the life. No one can come to the Father except through me.

What about you, my dear friend,

Lauren Daigle has captivated America’s hearts with her song, “You Say.” I would guess that you have heard it many times, but for illustration sake I want to describe what I see (yes, see) in her song.

But, I’m talking to you today and I want to know about you…do you believe? 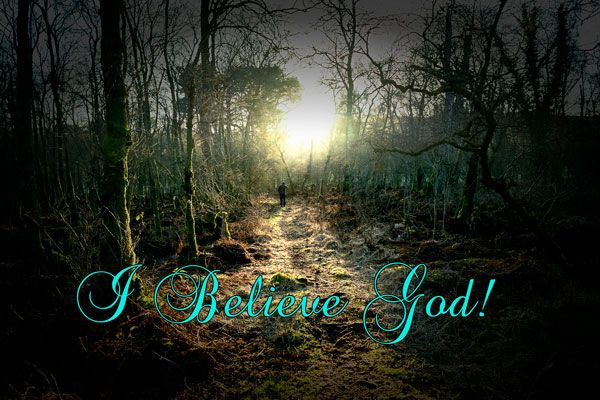 So one more time I repeat the words of the mighty profit Isaiah.

Who hath believed our report? and to whom is the arm of the LORD revealed?