What do you do with a broken heart? No really?

What do you do with loss?

Heartbreak of all kinds?

If you follow my blogs you know that I written several times about strength lately.

I haven’t been able to get away from the subject of strength. I am convinced God wants His children to be strong!!! I’ve been working really hard on a post about how to build spiritual muscles that I planned to use this week. It was almost ready when the Florida School Shooting took place. Valentine’s Day this year broke so many hearts. One more time America was shaken with a senseless…insane shooting!!!

After the news broke of the shooting, I felt like I needed a different strength;

If bad things only happened to bad people, I might try to form an explanation. But the truth is…they happen to the best of people.

And when things happen that I can’t explain,

I default to my core value…

I may not understand it, but I won’t blame it on God either. God is way smarter than I am, so I gave up a long time ago trying to give God advice. His ways are higher than mine. 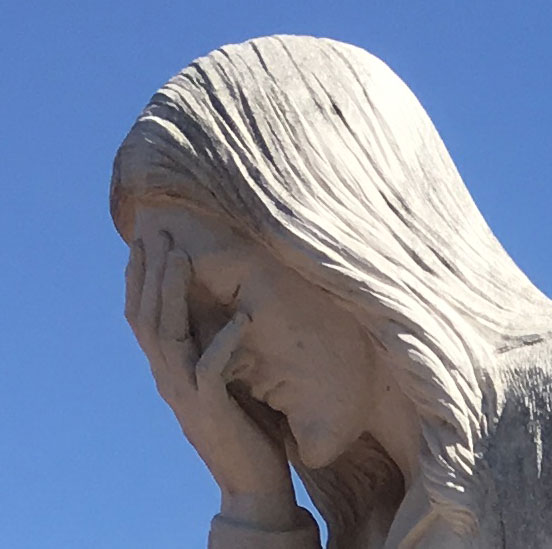 I also know that the Devil is evil and we live in a fallen world.

But the “why” question is simply too big for me to unravel…from the books I read and the Scriptures I’ve searched, God doesn’t seem to offer much of an explanation. It remains a mystery that refuses to fit in any of my neat little boxes.

I love that quote. I have used it so many times. It has reminded me again and again that what we really need is God’s presence.

So, instead of wrangling the “why” question…I go to what…no let me be more accurate… I run to WHO is always the ANSWER.

takes us to that reality and points us to Jesus with a poignant and riveting memorial that is dedicated to those that died and the lives that were forever changed by the Murrah Building bombing. 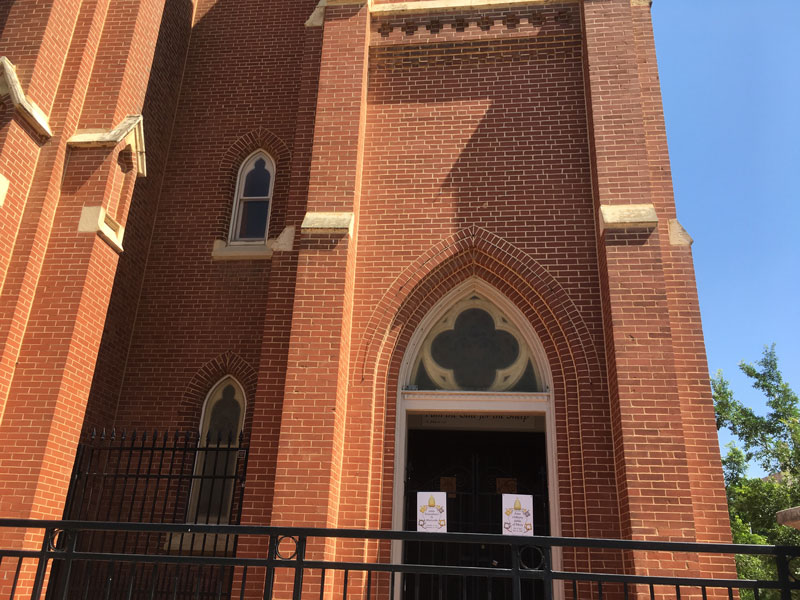 On April 19, 1995, at 9:02 a truck bomb containing 4,800 pounds of explosives, built by Timothy McVeigh, exploded in front of the Alfred P. Murrah Building. One third of the building was destroyed. The bomb created a 30 foot wide crater. It killed 168 men, women and children and wounded over 680 more.

The blast damaged or totally destroyed 324 buildings in an area that covered 4 blocks. It shattered glass in 258 additional buildings. The blast was heard and felt 55 miles away!

St. Joseph’s Church and rectory sat across the street from the Murrah Building. Most of the beautiful stained glass windows were blown out and it suffered extensive damage. The Rectory was totally destroyed. It was replaced with a solemn and beautiful memorial. While it is gut-wrenching and mind boggling to be reminded of the devastation, for me it was kissed with hope.

The memorial is an Italian marble statue of Jesus weeping with bent shoulders, 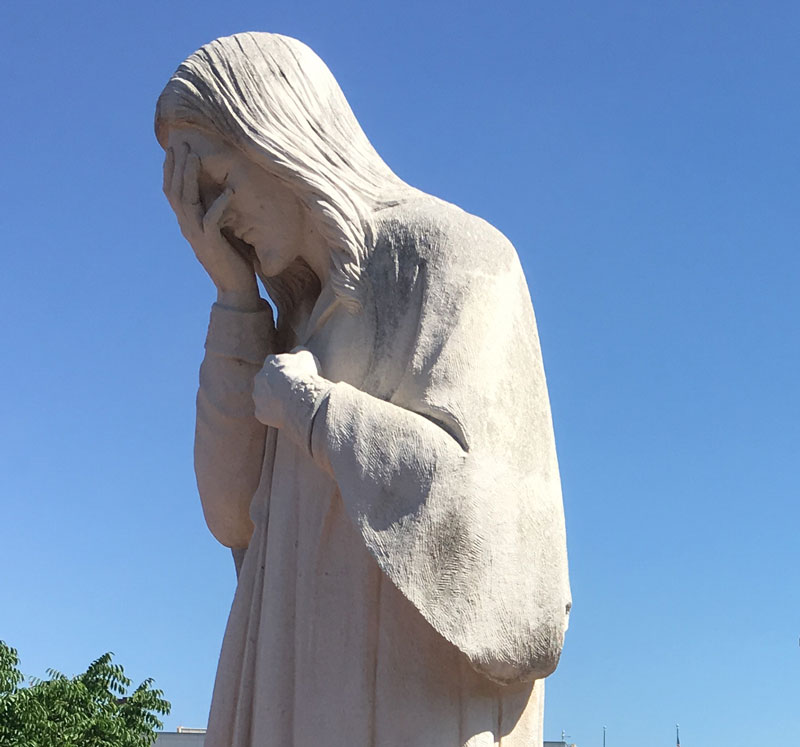 surrounded by 19 black pillars, which represents the children that were lost in the bombing. 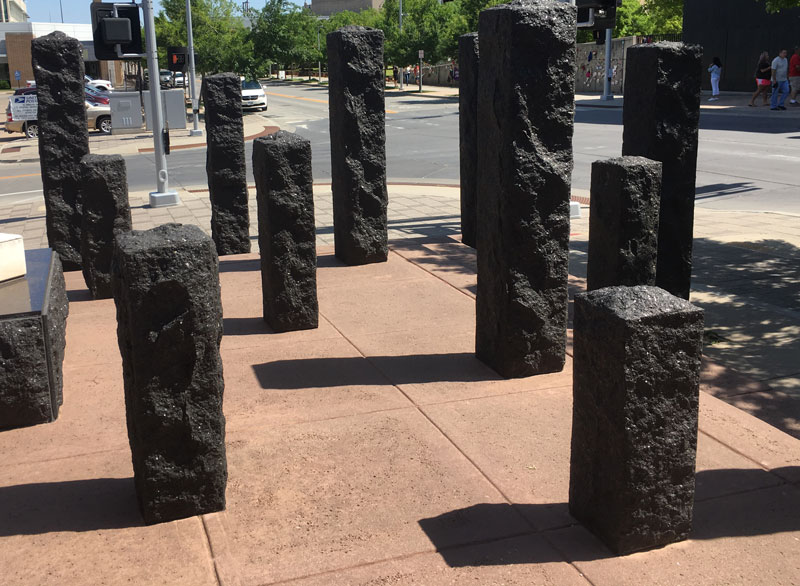 Jesus is facing a wall built of the same material as the pillars with 168 gapping holes to represent the people that are missing from loved ones lives. 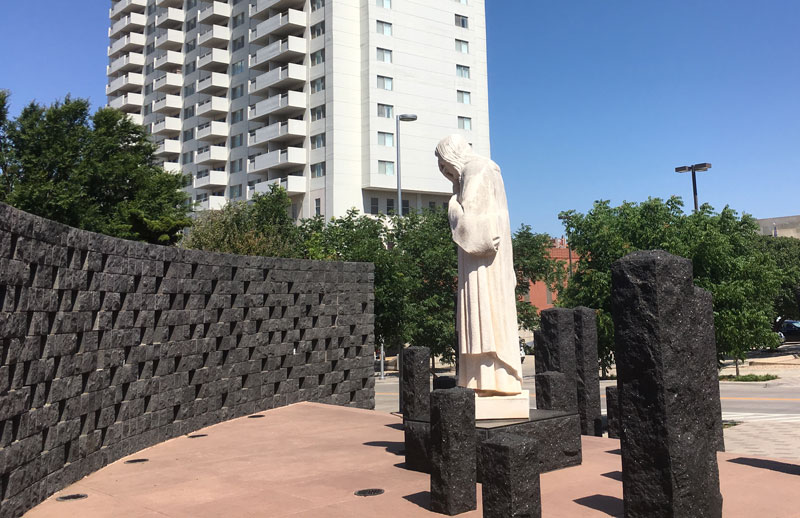 The base is inscribed with the simple fact… “And Jesus wept.” 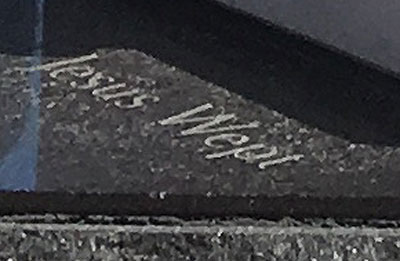 He identifies with our pain. Lets look at John 11.

Mary and Martha knew that Jesus would want to know. (Have you ever felt like nobody really cared about the situation you were facing? It’s an awful, almost debilitating feeling!)

But that wasn’t their problem. They knew Jesus cared, because they KNEW, absolutely without a doubt, that Jesus loved Lazarus and that He would want to know what was going on. So they sent word to Jesus, “Lord, the one you love is sick.”

Do you know…absolutely KNOW that God loves you? Then you also know that He want you to tell Him all about what is going on in your life, right?

But Jesus doesn’t throw an extra pair of clothes in a bag and rush off to save the day.

What He did next is baffling!

“v5 Now Jesus loved Martha and her sister and Lazarus.” That is a very methodical verse. Slowly naming each character in the drama and affirming his love for them.

“v6 So when he heard that Lazarus was sick, he stayed where he was two more days,”

Jesus knew that Lazarus was going to die. He knew He was going to raise him from the dead. He knew it was important for them to experience this because it would build their faith. (v14)

33When Jesus saw her weeping, and the Jews who had come along with her also weeping, he was deeply moved in spirit and troubled. 34“Where have you laid him?” he asked.

“Come and see, Lord,” they replied.

Why did Jesus weep? He came to heal Lazarus. He knew what was next…still He was deeply moved and He wept. 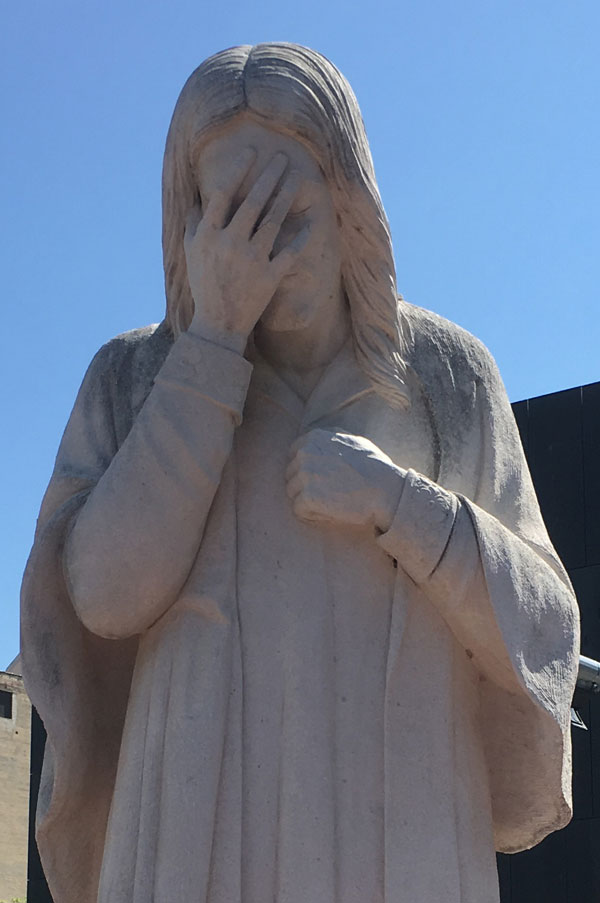 The people thought Jesus was weeping because He loved Lazarus so much, but that couldn’t have been why He wept! Lazarus was about to experience resurrection!!

Jesus wept for them–the living ones that were ravaged  with pain;

because of their limited ability to see what was really happening! They couldn’t see or know what God had in store.

He wept for them!

Jesus identified with and felt their pain.

If you are a believer, then Jesus lives in you and if you feel pain wouldn’t it make sense that He feels it too!

Hebrews 4:15 NLT “This High Priest of ours understands our weaknesses, for he faced all of the same testings we do, yet he did not sin.”

He doesn’t run from your pain.

He runs to your pain!

Jesus won’t force Himself on you. But He is there in tenderness, to comfort and infuse you with His strength.

Close to those with a broken heart.

Psalms 34:18 NLT The LORD is close to the brokenhearted and saves those who are crushed in spirit.

I think it is even plainer in the Contemporary English Version
The LORD is there to rescue all who are discouraged and have given up hope. Psalms 34:18 CEV 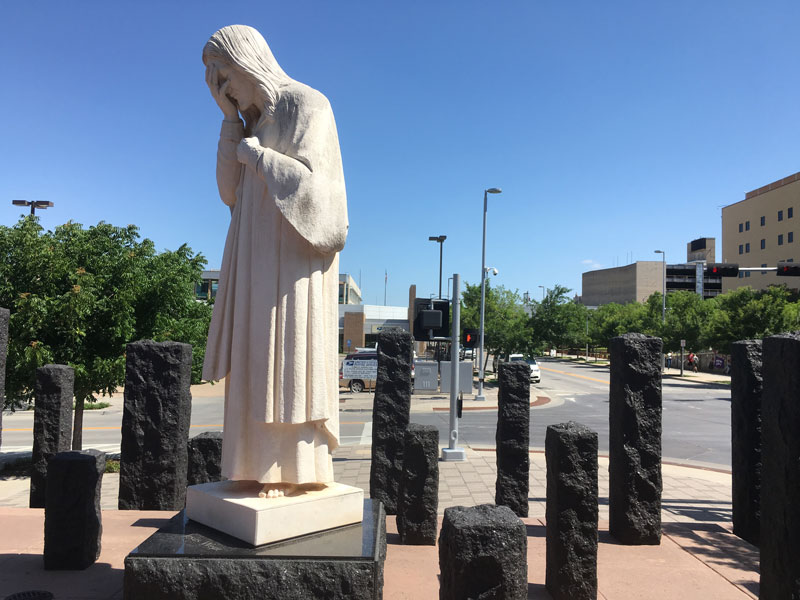 Sometimes we are weak and there is no use pretending to be strong. Our strength has limits and God understands that.

So when you are weak…HE IS STRONG!

Surrender the why question and embrace Jesus.

Let His love flood your being.

Let His grace absorb your pain!

I don’t know how you view that verse. But there have been times that I literally felt God had me in His arms and was rocking me, like a mother comforts her baby.

So I repeat the question again, “What do you do with a broken heart?”

You run to Jesus! Let Him comfort and soothe you! He loves you!

He wants you whole…and you can be, no matter what has happened to you.

It can take time, but don’t give up!

I wish I could touch you…hug you…but my reach is so short. So I point you to the strong arms of Jesus.

Can I interrupt this tender moment to share some links with you. Sometimes healing comes as we learn to  think differently! So I wanted to give you two resources that would dive deeper into the subject.

Here are two links that you can use to build your faith and/or help you encourage someone else as well.

Lee Strobel Article in Christianity Today Why Does God Allow Tragedy and Suffering?

Phillip Yancy wrote a probing, powerful book on grief, “The Question that Never Goes Away”. I noticed it is on sale right now at christianbooks.com for $4.99. It’s hard to read the grief stricken things that he has seen in the first few chapters. I could hardly get through them, but the following chapters are packed with gentleness and precious gems to help us help grieving people.

Let Him Comfort You

Is God with you?
Who Switched Off My Brain?
Need a FAITH lift?