Wrapped in a seven page speech delivered by President Theodore Roosevelt’s at Sorbonne  in Paris, France on April 23, 1910 is a powerful little paragraph that continues to be a source of inspiration and insight.


The Man in the Arena by Theodore Roosevelt

It is not the critic who counts; not the man who points out how the strong man stumbles, or where the doer of deeds could have done them better. The credit belongs to the man who is actually in the arena, whose face is marred by dust and sweat and blood; who strives valiantly; who errs, who comes short again and again, because there is no effort without error and shortcoming; but who does actually strive to do the deeds; who knows great enthusiasms, the great devotions; who spends himself in a worthy cause; who at the best knows in the end the triumph of high achievement, and who at the worst, if he fails, at least fails while daring greatly, so that his place shall never be with those cold and timid souls who neither know victory nor defeat.

I have to stop at the semi-colon in the first line, of this paragraph identified by the name, “The Man in the Arena,” because I am sad to admit, that my critics count way more than they should. 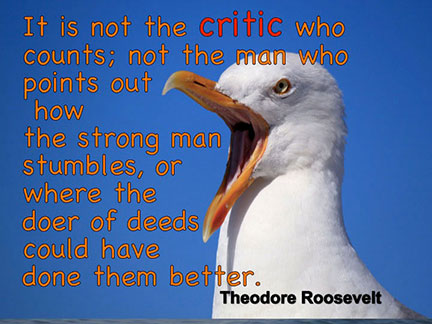 My frequent reality has been, the critics count.

caused me to isolate myself.

I remember too well, I was speaking in a large conference. I was passionately sharing a teaching that was well prepared and applicable to the group I was teaching. I had strong, interesting illustrations. I gave it 110%. The room was packed. Honestly, it was a good workshop.

But when I read my critics at the end of the conference, in the stack of all 9s and 10s (perfect was a 10) were two cards that had scored me really low.

I was devastated. I left that conference wanting to quit. It was long ago, but I still remember how my critics almost stopped me.

There was a room full of people that gave me 9s and 10s, but I allowed the voice of two people, probably the ones that sat and talked during the entire session, to cripple me. 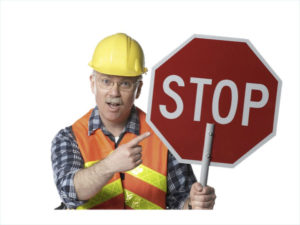 Why did I give my critics that power?

I am always eager to grow from insightful observation, but critics are very different.

I understand that everyone has different needs and opinions, because of that none of us can please everyone all the time!

But it was what I did with that criticism that made it so toxic.

I allowed it to

While I’ve made lots of progress, the fact is I can’t give that kind of power to people that I don’t even know.

While I’ve made lots of progress, the fact remains I still have to work at really, really knowing,

‘IT’S NOT THE CRITIC WHO COUNTS.’

As I look through scripture I have heroes that realized that truth.

No, it’s not a verse in the Bible, but they lived it with their lives.

I am so glad that David didn’t let the criticism of his brothers stop him. He loved his brothers, but refused to be confined to the boundaries of their estimation of his abilities.

David focused on the reward, not the war. Tweet this!

Nehemiah’s critics mocked his brave reconstruction project with jeers of, “If a fox climbed on that wall it would fall down.” And it was true, Nehemiah’s laborers were unskilled. And the building materials were limited to rubble. What did Nehemiah do when his critics gathered with acidic observations?

In spite of criticism Nehemiah, prayed and got back to building.  Tweet this!

Paul’s critics took their criticism to the max with beatings and murdous attacks, but they didn’t stop Paul.

You gotta have a sense of purpose and commitment to keep going with your faced with brutal critics.

Paul blazed a trail of commitment, that is unobstructed even in an overgrown jungle of self-indulgence.

These heroes of the faith understood, “It is not the critic who counts!”

Your critics can be

Don’t let your critics stop you

from becoming the person you He called you to become.

from hearing God say, “Well, done!” (And I’m not talking about how you like your steak, either.) Tweet this!

You were running the race so well. Who has held you back from following the truth? Gal 5:17