They still echo across the canyons of time. A stern warning that made me, as a sensitive little kid, stop what I was doing and want to run hide. Sometimes I did…hide …in the cluttered closet, behind the blankets and boxes and shoes or sometimes under the bed; where no one could see me… where I could pout…that’s what she called it…cry it what I called it…all by myself…where no one could see what a bad person I was.

My mom would call from the door, “I see you. You know better than acting like that.” That’s not what I wanted to hear…not after what I did…maybe I had hit my sister and pretended I had done nothing. Or worse, stick my tongue out at my mom, behind her back. Do mom’s really have eyes in the back of their heads? My mom did! And she confirmed it with, “I see you.”, even when she wasn’t looking at me!” I knew she did and I didn’t like those words, “I see you.”

The whole story is a sad, dysfunctional story. I wonder if it was a story that was whispered when the women gathered at the water cooler, aka the well or closest watering hole. 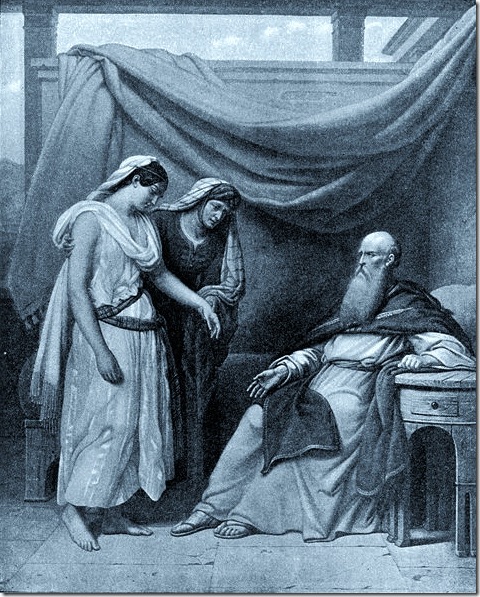 Actually, it was Sarai’s suggestion.

It was her last ditch effort to give Abram the son that he so desperately wanted. But things weren’t working out like she planned. The Bible candidly shares that Hagar hated Sarai, after she found out she was pregnant with Abram’s child. The Bible, as it often does, leaves out the details of the awful tension, the hateful words, the malicious actions that always takes place where there is hatred. But life gives us an idea of what it must have been like. Or, if you’ve ever lived around out right hatred, you probably carry its scars, so you can imagine the scene—the terrible scenes that must have taken place. Hatred poisons. Hatred blinds. Hatred fears nothing and everything, all at the same time.

Sarai, don’t forget she was still called Sarai at this point, blamed Abram. I’m not inferring that Sarai, was blameless, it’s just that I can’t tell you what happened in the house except what I see through the little crack in the tent opening that Scripture gives us. But it does tell us that Sarai got fed up, so fed up that she had one of those “I’ve had enough” chats with her husband. She let him know, under no under certain terms, that “he”, that’s right, he was to blame for all the garbage that was going on in the house. She’d had “enough of Hagar” and something had to change. Is that what you see in Scripture or am I using the lens of “I’ve been married a long time and that’s what I would have done”.

At any rate, Abram, said “She’s your maid.

Do what you wanna do, woman!” At least that’s how it sounded to me. So Sarai did! And it wasn’t pretty, folks. It was all out war on the home front. Two mad women, with a bad “you done me wrong” attitude is never a pretty thing to see.  I know absolutely no one out there watches any of “The Real Housewives of…” shows, (please tell me that) but maybe they took lessons from “The Real Housewives of Abram”. Just saying…it wasn’t pretty folks. It wasn’t pretty! Angry words?  Indignant looks? Hateful actions?

The anger and frustration only grew worse as Hagar’s abdomen grew plump and round as the little baby in her womb developed. Wayne interjected as this point, “As Hagar got a full belly, Sarai got a belly full of Hagar.” Thank you Wayne for your invaluable insight and humor!

Helpless and hopeless Hagar ran away!

Running away is an entirely different scenario when you live in the middle of nowhere, literally nowhere, with no towns or people nearby. A barren desert doesn’t offer a smorgasbord of fine dining opportunities either. While I understand Hagar’s decision, it looks as if things just turned from bad to life threatening worse.

But, she found a spring that saved her life and plunked down beside it to rest and quench her thirst. I wonder if the heat and the reality of where her choice had taken her softened her attitude enough that she was ready to hear the message of her visitor. He called her by name. I like it when people know my name. But it makes me curious and I think “How do they know my name?”, if I don’t recognize the face of the person that has just recognized me. But, her visitor knew more than her name as evidenced by “Hagar, Sarai’s maid, Where are you coming from? Where are you going?”

She answered honestly. “I’m running away.”

“Go home and submit to your mistress.”

He had some more stuff to say. I hope you’ll read it later, but for the sake of my story let’s go to verse 13 NLT. It says “Thereafter, Hagar used another name to refer to the Lord, who had spoken to her. She said, “You are the God who sees me.”[a] She also said, “Have I truly seen the One who sees me?”” 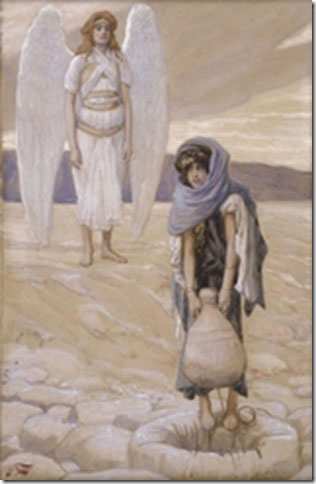 It had to be difficult to go back. I can only imagine just how incredibly difficult it must have been to face mean ole, so sorry, I had a weak moment, just plain, Sarai,without the mean ole part. But she had new strength to face her difficult circumstances. She was armed with the knowledge that God sees her. Not in the sense of how I viewed my mom at the door when I had done wrong. But in the sense that God cared and loved  her even when she did wrong. Even when she was weak. Even when she was angry and disappointed and afraid. Past her pain. Past her sin.

It was a turning point for Hagar.

From that point on, she had a new name for God. She called Him, El-roi. You are the God who sees me. What a revelation…an imperfect woman… in the middle of a desperate situation. God meets her right where she was and totally turns her around with the reality that God sees and He cares.

But, He loved her too much to pet her attitude or leave her in a pit of rebellion. I don’t believe God endorses “Greasy Grace” that leaves you to do whatever makes you feel good. He told her what to do, and I am convinced he gave her the grace to do the right thing, even though it was hard.

I don’t know where you are in your walk with God.

Maybe you’ve forgotten that God sees. Or maybe you live life through the paradigm that God glares at you through a lens of “You know better than that!” I want to remind you that Hagar discovered long, long ago that simply is not true! It’s not. God sees you through the lens of love. No, He’s not blinded by love. Neither is He influenced to wink at your sin or wrong doing because of love. But He sees you and He wants to help you do the right thing.

But, if you’re like me, so often I cry out from the very depths of my soul “O, God! O, Father, what is the right thing to do in this situation?” Slowly, not ever as quickly as I want Him to, not ever, He tells me. He guides me, not as clearly as He did Hagar, but clear enough that I know in my heart what to do.

And the part that I love the best, even better than just knowing He sees me, is that part that He is with me. And as a believer in Christ Jesus, He is in me to help me do what I need to do. Don’t misunderstand me. I’m not saying its easy. I’m looking for His way, because its right. And its good for me.

Thank you, Father, that like Hagar we can say, “You are the One that see me!” And can I add, still loves me afterward!

My goal is to publish every Tuesday. Actually, I’m trying to get more organized so the posts are done farther ahead of time than they are right now. I’ve also been testing some different days to see which days works best for my readers. I’d love to hear from you. What are your best days for reading a blog. My goal is to get back to posting twice a week, but with all the other projects I’m working on, it just isn’t happening! Thank you for your patience.

If you were blessed

by this post or if you know someone that might be, please pass it on! Thank you sooooo much! I pray God’s richest blessings on you as we work together to build HIS kingdom, not ours!

Psst! I’ve got something special coming.

Maybe you’re wondering why I named this post Eye C U instead of I See You! I could tell you now, but can I just show you with Friday’s post Eye C U 2. It’s something a little different than most of my posts and it’s one you’ll want to share with your children, grandchildren or maybe your class. So don’t forget to read my post on Friday. I’ll be posting it at 6:00 am Friday morning. Be sure to stop by and let me know what you think.