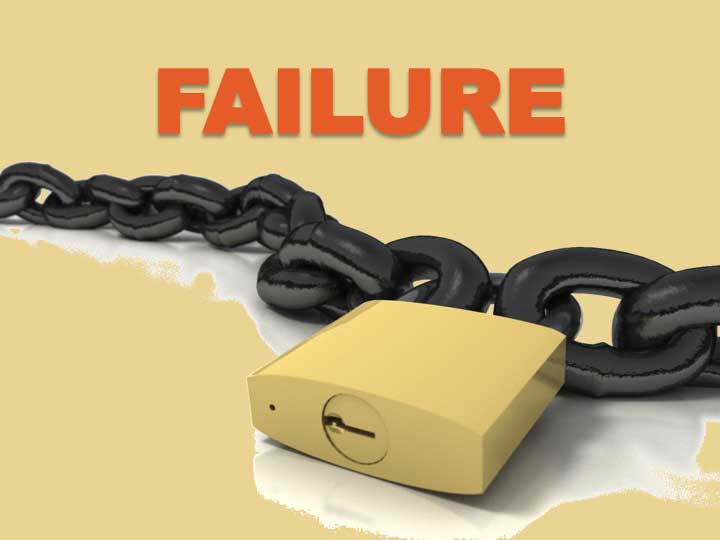 Failure is not our enemy!

We know that! So why do we drag failure into our future?

It only makes us a prisoner.

It sets us up to fail again!

It totally paralyzes us!

Or we just use it for a whip to beat ourselves up every time we dare to step out!

take that class in photograph.

or buy that piece of property.

or build that night stand or garage.

or fix that broken bike.

or teach that class.

or finish that book.

or make the contacts necessary to become a public speaker.

I won’t deny that there’s always a risk…you might fail, especially if you want to achieve something great

grow or learn something new.

encourage or inspire someone.

be the catalyst for change.

birth revival…in your home…in your city…in your nation!

Failure is not your enemy!

It’s your teacher. So listen.

What can you learn from it?

How can you grow?

What do you need to do differently?

But don’t let it

stop you from fulfilling your God given purpose.

As Paul neared the end of his life, he writes, “I have fought the good fight, I have finished the race, and I have remained faithful.” 2 Timothy 4:7

I don’t want to leave “The Man in the Arena” by Theodore Roosevelt (from last week’s post)  without focusing on the next line of that paragraph.

… The credit belongs to the man who is actually in the arena, whose face is marred by dust and sweat and blood; who strives valiantly; who errs, who comes short again and again, because there is no effort without error and shortcoming; but who does actually strive to do the deeds; who knows great enthusiasms, the great devotions; who spends himself in a worthy cause; who at the best knows in the end the triumph of high achievement, and who at the worst, if he fails, at least fails while daring greatly, so that his place shall never be with those cold and timid souls who neither know victory nor defeat.

In this single sentence I see

Does God’s purpose for your life, propel you, does it push you to do what you know you should be doing?

Does it get you up early or keep you up late?

Does it cause you to move outside your comfort zone?

Does pleasing God really matter to you?

Failure happens, but get up. Get going.

The godly may trip seven times, but they will get up again. Proverbs 24:16a

Be the person who spends himself in a worthy cause;

don’t squander your life away.

I’ve been too friendly. I’ve not been friendly enough.

I’ve opened my mouth and embarrassed myself.

I’ve failed to call and called too much.

But at the foot of the cross, I leave my ball and chain of failure. I surrender it to Jesus.

I refuse to allow my failure to whip me, to embarrass me, to make me ashamed.

I will learn from it. But my goal in life is pleasing Jesus.

So when I fail, I’ll repent. But it will not keep me out of the arena!

If you see me sweating or bleeding, just realize I’m pressing forward toward the high calling of God that is on my life.

I press on toward the goal to win the prize for which God has called me heavenward in Christ Jesus. Philippians 3:14