Catch the wind of the Holy Spirit?

Why would I want to catch the wind? And, what do I mean when I say “catch the wind of the Holy Spirit”? The Greek word used for spirit is pneuma which simply means wind, breath or spirit. Many of the attributes of the wind describe what Holy Spirit is like. And, since we can’t see Holy Spirit with our eyes, these descriptions are important for us to know Him better.

Let me share a story to explain why I would want to catch the wind.

What a ridiculous endeavor! You can’t catch the wind…every child with an empty jar has tried to do it, at least once! Catching the wind is almost as crazy as my dream to see Holland. (I know the proper name is the Netherlands, but as a child I knew it as Holland and since my last name is Holland, will you indulge my preference?)

Holland was the one place outside the U.S. that I really wanted to see:

The birthplace of one of my heroes, Corrie ten Boom.

The homeland of renowned artists Rembrandt and Vermeer.

Shouldn’t everyone with the last name “Holland” see Holland?

Seeing Holland, MI during tulip season only intensified my desire to visit there. When my friend, Joy, posted her picture of the sun setting behind the windmills at Kinderdijk, my dream was solidified.

While I didn’t catch the wind, I made it to a village that has been catching the wind for almost 200 years–Kinderdijk. A windmill scene is iconic for the Dutch countryside. Kinderdijk is much more; it is the largest concentration of old windmills in Holland and one of the best-known Dutch tourist sites. It has been listed as an UNESCO World Heritage site since 1997.

I cannot describe my excitement

as I walked down the paved path toward the first of 19 windmills stately towering against a darkening sky. I was mesmerized by the beauty and nostalgia that these windmills, built in the 1840’s, had withstood the test of time. They had endured the pressure of winds and storms and here I stood listening and watching as the wind turned the huge sails of the windmill. The windmill was made of red brick topped with a thatched roof cap made from the dried canes of reeds that flourished in the shallow waters of the ditches that seemed to go in all directions at once. 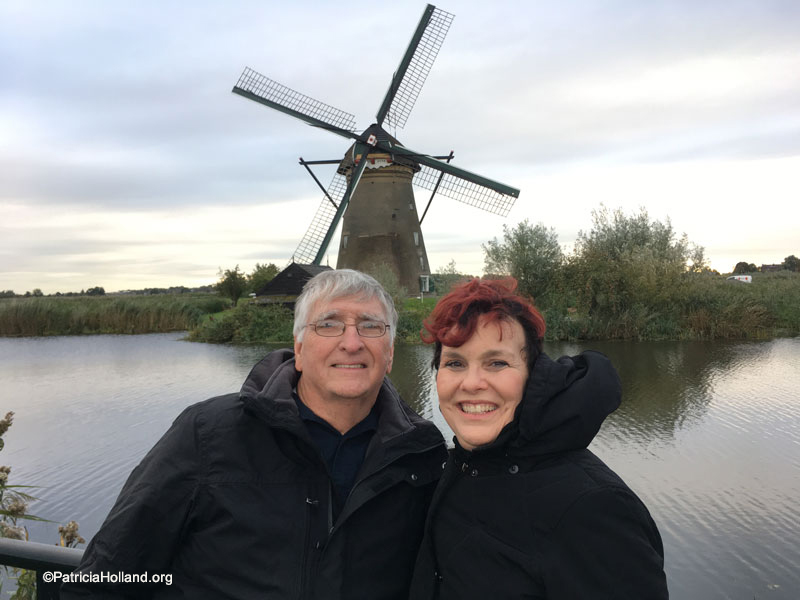 From one beautiful windmill to next I hurried to breathe in it’s distinct beauty. The wide ditches (dykes) were flanked by a variety of tall grasses, some with fringed heads, that swayed while ducks plunged head-first under water and birds on skiny legs like stilts waded into muddy places for their supper. With the elegance of royality, a bevy of swans glided past emerald colored meadows alive with song birds, dairy cows and goats. Their sounds filled the ponder. This was land reclaimed from the sea. 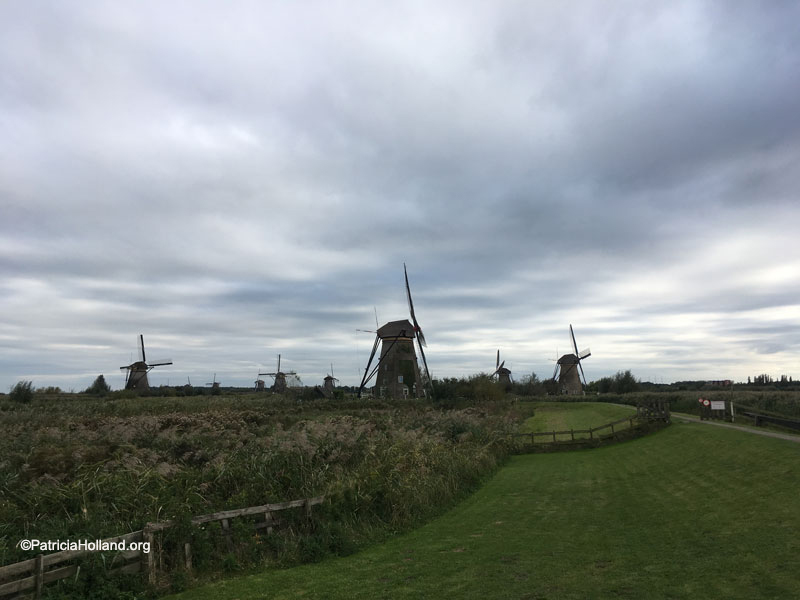 This beautiful place was literally made by the majestic giants that stood silently around me.

What I didn’t realize was that 26% of this beautiful nation is below sea level and over 50% of it is prone to flooding. Something had to be done to prevent this catastrophic loss. These windmills were more than beautiful monuments; they were the workhorses that kept the waters from overtaking the land. The strategy was brilliant! 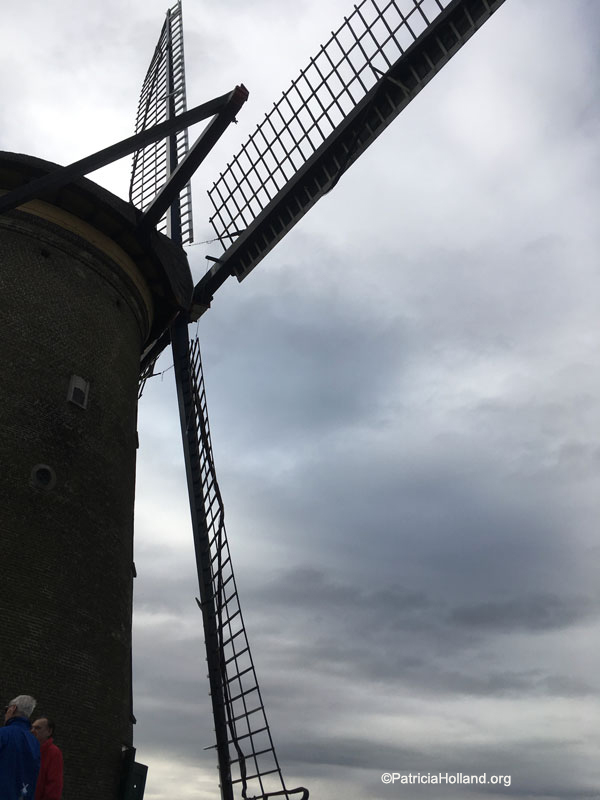 The sails caught the wind and used it’s power to operate the heart of the windmill. The wind power turned the cogs and wheels and finally the Archimedes’ screw that lifted the water to transform and reclaim the land from the sea.

Each windmill was a member of the team that lifted the water up and higher, then handed it off to the next windmill to lift it yet again until it was pumped into canals that took it out and finally dumped it into the North Sea. It was the only way to have dry land. Without these beautiful giants the sea would reclaim or flood over half of the nation.

The miller, like a sailor at sea, has to furl and unfurl the sails to catch the wind most effectively. And because the wind can come from different directions the blades of the windmills had to be turned to face and catch the wind. This feat is accomplished by turning the cap of the windmill which is installed on rollers and turned by a wench then hooked in place.

For Holland it was a matter of survival.

That beautiful country is a result of a water management strategy that enabled people to reclaim the land from the sea.

Reclaim-I love that pregnant picturesque word. It’s a victory word. Reclaim, recovering what was lost and the joy that accompanies it. It’s a mantra…a vision statement…the goal that took Jesus to the cross. He came to seek and to save that which was lost.

Isn’t that what every believer, including you, are called to do—reclaim the sons and daughters that should be in God’s kingdom—the kingdom of light! Jesus issued that mandate in Matthew 28:19. It boils down to “Make Disciples!” Mark 16:15 Go!

They could not accomplish their task without power; they accessed wind power.
I have good news for you. You can never be what God has called you to be without the power of God. How is that good news?
Because His strategy all along has been for you to access Holy Wind.

You were designed to plug into more than a natural resource.

He is a Supernatural Resource.

He is more than power. Holy Spirit is the third person in the Trinity. He is God’s active agent in the Earth. He came to indwell believers and help us be more like Jesus. One of His many roles is to gives us the power to do the works of Jesus.

“But you will receive power when the Holy Spirit comes upon you. And you will be my witnesses, telling people about me everywhere–in Jerusalem, throughout Judea, in Samaria, and to the ends of the earth.” Acts 1:8 NLT

You were designed with His power in mind; just like a hair dryer is designed for electrical power.

It’s good news for us, that God’s Power is available to every believer.
It’s bad news for the people we’ve been assigned to reach, when we fail to access it.

You can’t catch the wind, but you can access its power.

The millers couldn’t control the wind, but they could set their sails to catch the wind and utilize its power.
That’s what believers do. They look at what Jesus did in Scripture; they listen to His instructions and access Holy Spirit/Wind power to accomplish the tasks we have been given.

Have you been filled with Precious Holy Spirit?

Maybe you’re thinking, “If God wants me to have His Spirit, then He will give it to me.
If the Dutch had embraced that ideology they would be a much smaller nation. They built the windmills to catch the wind. They continually rotated, furled and unfurled their massive sails to capture the power of the wind. 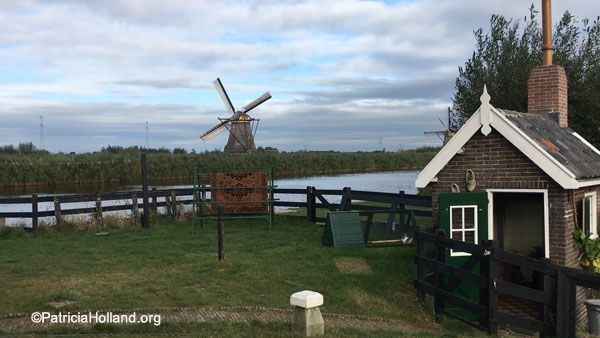 How do you catch the wind?

Yield to Precious Holy Spirit. Listen and obey His instructions. Lean into Him to receive His strength and power. It’s not automatic. His power must be accessed. We must ask, believe and receive.

God’s amazing gift of the Holy Spirit.
There is so much I want to say, but already this blog is way longer than the experts say it should be.

It’s available on Amazon too.

I don’t know about you, but I love to listen to books while I work. It is one way that I learn something new everyday. And it’s also a way that I diligently grow and develop my faith. Don’t miss out. This sale won’t last long! 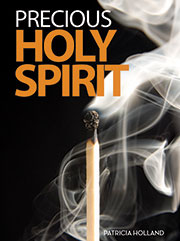 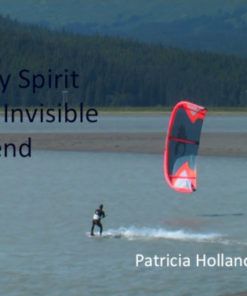 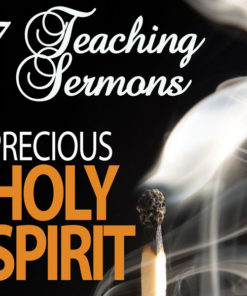