I’m always surprised by how cold mountain streams can be 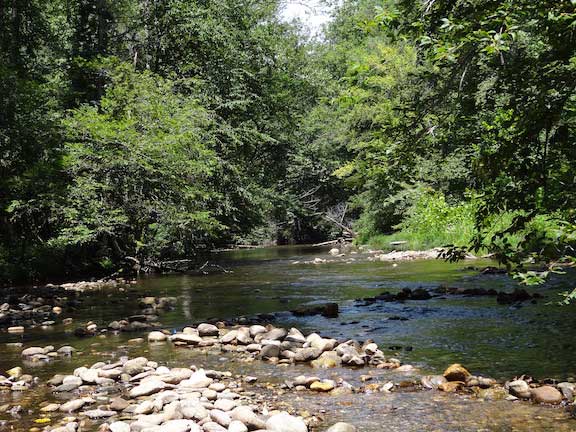 I’m always surprised and delighted because July can be really hot even in the mountains. Our oldest grand-daughter, Karyn was with us. Coontree Picnic Area was an unscheduled stop for us. 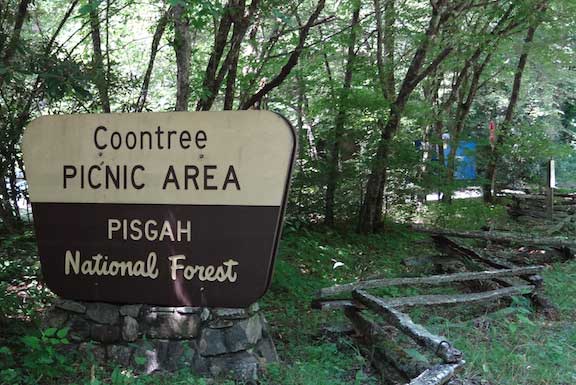 And it turned out to be the most fun of all the places we went.

I wanted to show her Lake Lure.

And I wanted her to see the wonderful and whimsical garden on the lower bridge just beyond Lake Lure. It is called Lake Lure Flowering Bridge. 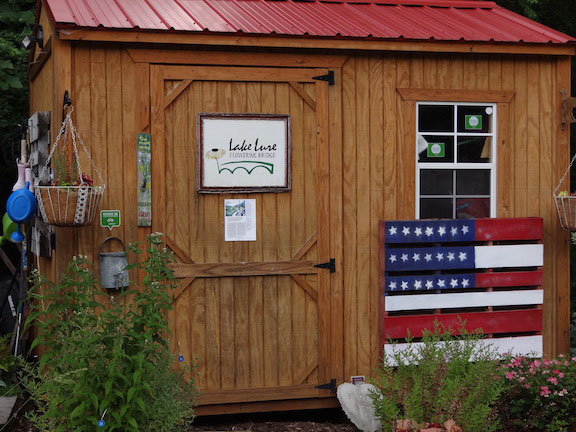 I was surprised that she was snapping as many pictures of flowers as I was. 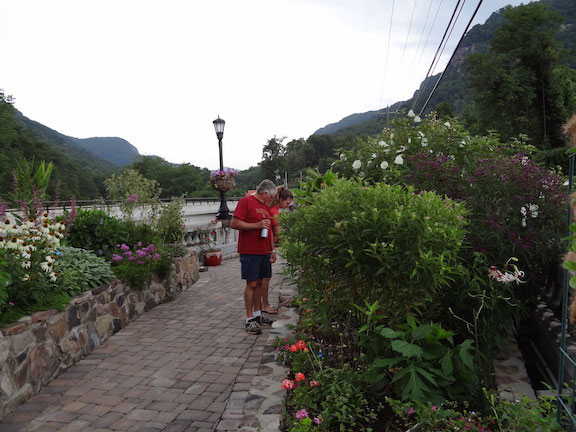 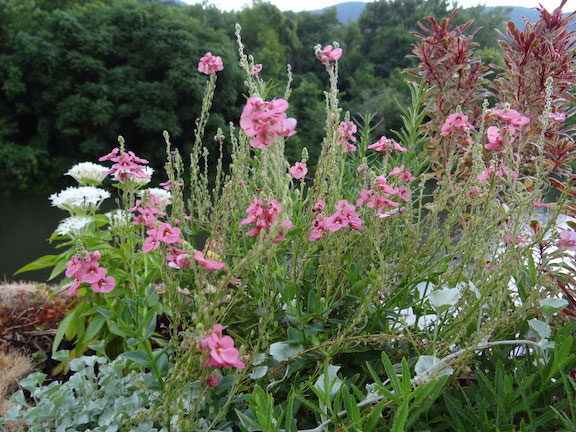 We stopped at Looking Glass Falls.

It is a powerful waterfall! The crashing of the water into the pool creates a powerful wind. It was a beautiful stop. 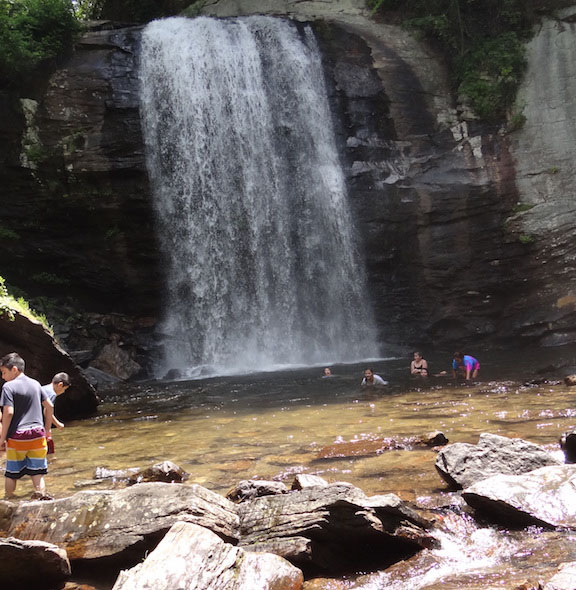 Our destination was Sliding Rock,

but we didn’t stay long. Long story. I won’t bore you.

So we returned to Coontree Picnic Area and this time we had our inter-tubes. The water was swift in one place in the river, then slowed when it reached a deep pool. The water was shallow everywhere else. 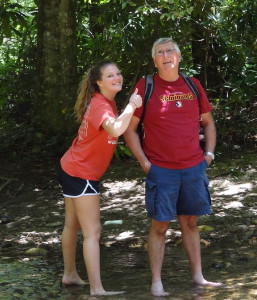 Hanging over the deep pool was a tall cliff. Folks lined up and waited their turn to jump off the cliff again and again. Karyn met some girls her age and had a blast. 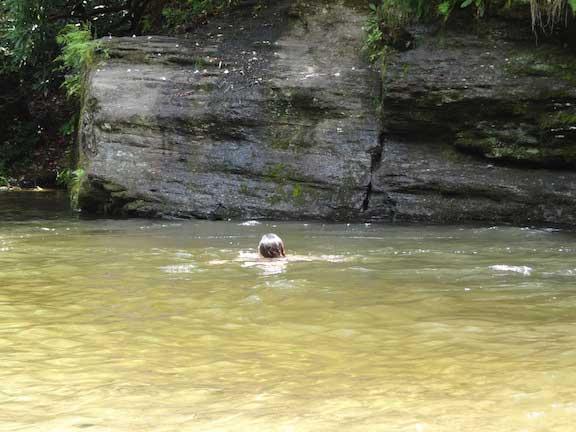 Wayne watched her and took tons of pictures. I think it was a game to time the click just right so he caught her and not just a splash.

Meanwhile, I still had my inter-tube. Again and again I waded through the current over slippery rocks into the center of the waterway. Picking a place where the current was swift, I lay way back into my inter-tube so my weight was distributed well enough that I didn’t drag the bottom. It was an exhilarating ride that came to an abrupt stop because the water was so shallow! I retrieved my inter-tube, walked across a little patch of dirt everyone was using for a beach and waded back into the water for another current powered ride. 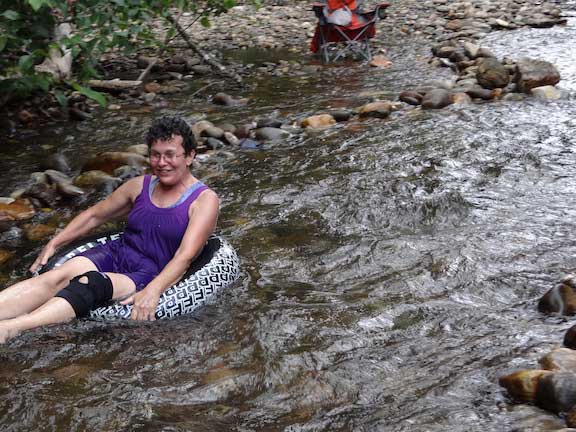 It’s funny how sometimes you don’t really notice things until something makes you aware.

That something was a man dredging flat rocks from the bottom of the stream and stacking them to the side. When I looked I realized that there was a stack of stones on both sides of the area where the water was really swift. 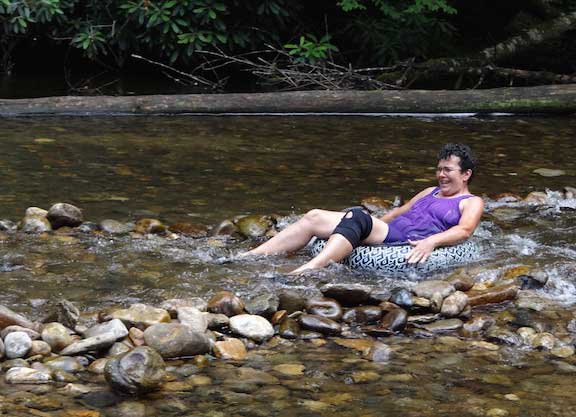 It looked like a wall of stones you would put around a walkway. Only this was a waterway and he was removing the stones from the bottom so the water would be deep enough for us to ride farther in the swift current.

The man was older.

Grey hair, wrinkled. Accompanied by a woman, about his age and a very obedient dog on a leash that begged to get into the water. No inter-tube. No kids. The dog waited as the woman relaxed in the water and the man stacked rocks.

When I realized what the man was doing I thought, “I wanna be like him!”

I couldn’t think of any personal reason why he would be stacking rocks. His motive seemed to be selfless. He was making a trail, a path in the riverbed for kids and crazy old ladies like me to have fun.

I should have thanked him, but I never thought about that. Duh!
I don’t think he was looking for a thank you. He simply saw a need and without fanfare or ceremony moved stones.

Jesus was that kind of man.

He held children.
Waited at a well for a troubled woman.
He cooked breakfast
Jesus noticed things…

a spiritual hungry man in a tree

hungry bellies in a crowd…

and lend a hand to those who falter,

and not just do what is most convenient for us.

Strength is for service, not status.

2 Each one of us needs to look after the good of the people around us, asking ourselves, “How can I help?”
3 That’s exactly what Jesus did.

He didn’t make it easy for himself by avoiding people’s troubles, but waded right in and helped out.

“I took on the troubles of the troubled,” is the way Scripture puts it.

Did you see that?

Love opens our eyes to see the needs around us. 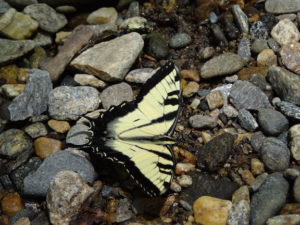 How can we say we have the love of God, when we …

aren’t kind to people
are impatient.
are selfish
are jealous
are  lazy

but Jesus didn’t stop with seeing or feeling.

He healed the sick.
He interrupted and ended a funeral when he raised the broken hearted mother’s son.
He touched and healed leprous outcasts.
He opened eyes.
He stopped storms.

And because of a promise in Scripture we don’t have to just watch the story recorded in scripture.

will do the same works I have done,

and even greater works,

because I am going to be with the Father.

13You can ask for anything in my name, and I will do it,

so that the Son can bring glory to the Father.

God hasn’t stopped revealing His love to people. Tweet this!

His plan is to reveal it to them through us.

We are to be carriers of His love and presence everywhere we go.

Father, give me eyes that see the needs of others. Forgive me when I allow my plans, my busy schedule to blind my eyes. Give me a caring, kind heart that propels me to serve, give and love. Help me to be rooted in your love, so that it flourishes in my life and nourishes the hearts of those you’ve planted around me.