My daddy made the best “Sweet Potato Pie” ever.

Yes, it’s a Southern thang and no, it’s not the same as a Pumpkin Pie–it is way, way better. He only made them at Thanksgiving and Christmas.

Why do we save the most delicious things for only holidays?

Just saying… Sweet Potato Pie was my dad’s claim to fame.  I adamantly defend that claim, but I would consider your challenge of ownership to that title, if you wanted to invite me to your house for a slice of your best Sweet Potato Pie.

Daddy always baked the potatoes until they were caramelized and then allowed them to cool.

There’s where my efforts to make a pie get off track. Potatoes at that point of deliciousness are made for eating. Wayne likes to cut a slit into the potato, cut squares of butter into the opening, then ladle spoons of brown sugar into the gooey orange cavern created by the outer peeling. But I like mine sprinkled with a generous dusting of cinnamon–not too much or  it will make it bitter, but enough to enhance the natural sweetness of a sweet potato.

But somehow daddy resisted the temptation.

He peeled the skin that slipped right off the potatoes, then dropped the gooey deliciousness, (have I watched too many cooking shows), into a large mixing bowl. He added just the right amount of cinnamon. None of those other fancy spices- just cinnamon. He added sugar, not too much, just enough to sweeten the pie without leaving that too sweet taste to linger in your mouth. He added eggs, but never milk or cream– that turns the pie into a custard, not an acceptable texture at the Batley house.

Simple! Right? Then why can’t I make a pie like Daddy’s? He just had the… whatever it is you gotta have to make the most delicious pie in the whole world. And he definitely had it! 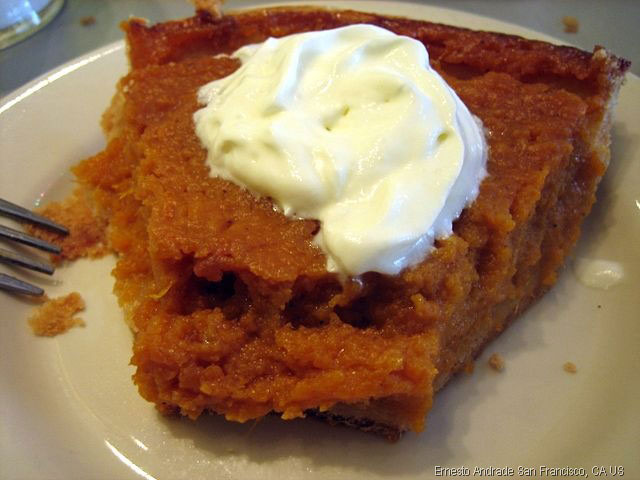 Some folks prefer their pie served cold, but I like my sweet potato pie hot, fresh from the oven.

Daddy never made us wait until after dinner for our first piece. As he was still pulling the pie outta the oven, he would offer the first piece. And I was there to get mine.

The kids or anyone else who wasn’t in the kitchen, when he pulled the pie out of the oven would complain—“don’t eat it all. I want some!” They were alarmed.

They were afraid, because they had a one pie only mentality.

They wanted “their piece,” before the pie was gone. But what they didn’t realize is; there was more where that  came from. Daddy was generous. Daddy made more pies than we could possibly eat in one evening and there was a bunch of us at the table and in the living room and in the den…you get the picture.

And yet too many people live their lives as if “one pie only” was a reality. Even believers often live that way.

Grabbing. Hoarding. Jealous. Envious. Greedy. All attitude and symptoms of people that “think” God only has one pie, so I gotta get my piece before it’s gone.

And yet too many people live Grabbing.

All attitudes and symptoms of people that “think” God only has one pie, so I gotta get my piece before it’s gone.

like a child grabbing the last drumstick on the plate.

But what we need is to change the what we believe.

And we change what we believe by changing what we think.

I realize people’s opinions and belief systems rub off on us. They influence us. Sometimes they rob us and defeat us. And that will and does happen if our belief system is founded on anything other than God’s Word.

Do you believe, really believe that you are blessed? That the work of your hands will prosper. That God is for you and not against you?

3Your towns and your fields

4Your children and your crops

The offspring of your herds and flocks

5Your fruit baskets and breadboards

6Wherever you go and whatever you do,

you will be blessed.

If for any reason you don’t believe, deeply believe you are blessed by God, it’s time to change what you think and the way you think.

Anytime and every time you think a thought that is contrary to God’s Word replace it with God’s Word.

Don’t struggle to wrestle it to the ground or try to persuade it to go away.

2 Corinthians 10:5 NIV We demolish arguments and every pretension that sets itself up against the knowledge of God, and we take captive every thought to make it obedient to Christ.

Resist wrong thinking, by replacing it with principles of ultimate truth– God’s Word. What does God say about you? About your need? Begin to think on His promises. Begin to declare His promise aloud.

Just like my dad, your heavenly Father has more than one pie. And boy am I glad!

He is generous and He has blessings that you never dreamed of that He wants to share with you. You are not alone. He wants to give you everything you need to fulfill the plan that He has for you life.

Are you kidding me? He’s got more in the oven- just waiting for you to ask. Get you a plate. Enjoy!