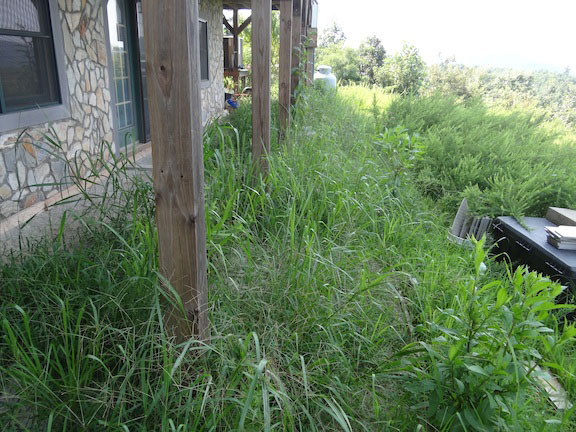 It probably looks like weeds to you, but it was so much more than tall weeds to me. It sucked the last bit of energy from my tired body. Wayne, wanted us to get to North Carolina in time to check things out. I wasn’t looking forward to it. I knew the grass would be tall, but I encouraged myself with the knowledge that the last thing we had done before we left was spray for weeds and cut everything nice and short. So maybe, just maybe, it would be manageable.
But my optimism was unfounded. Tall, thick weeds grew on the back patio where we planned to lay flagstone when we returned.
Not just tall weeds, giant, angry foreboding weeds. They grew all the way to the back door and were about shoulder height. How could weeds grow so tall in sand. I wilted at the thought of all the grass that had to be cut and all the weeds that had to be pulled. In my beautiful flower garden, my driveway, my stone pathway going to the back, not to mention the wilderness that encroached the boundaries of my backyard! I asked Wayne if he was ready to go home yet and we had only been there 5 minutes.

He heard the sucking sound of my energy being drained as I saw all the work that had to be done. Well, actually what he heard was me griping. He wrapped his arm around me and tried to encourage me with a funny comment. But it wasn’t funny and I was in no mood to be encouraged. I was tired. I wanted to rest. I wanted to complain. But I have learned complaining digs an emotional hole of discouragement bigger and my hole was big enough. So I went inside.
I knew the last time the grass was like this it had taken us a week to get it cut and we didn’t have a stone path or the patio didn’t have any weeds last time. I started pulling weeds in the front, while Wayne tried to crank our recently purchased weed whacker. It wouldn’t start. I started cutting the side yard with a small electric, much older weed whacker.
A lawn maintenance man stopped and wanted the job. I gasp, not where he could hear me of course, when he quoted his price. He had the equipment. He could do it quick and it would be done. When I hesitated he began telling me about all the rattle snakes and copperhead snakes that had been sighted in the area just the week prior. He filled in the details with sound effects to be sure I had a clear picture. I got it, a clear picture of tall grass, tall weeds AND poisonous snakes. Thank you Mr. Businessman, so glad you stopped by today!
Wayne determined he would have to take the “new” weed whacker to be repaired. Too new and too expensive not to have it repaired. He took a turn on cutting the weeds on the side and I pulled weeds in the front flowerbed, just in time to see a snake make its appearance. This was going to be a “good day!” It was a black snake, so I just moved out of its way and watched it slither under the porch! On my second turn with the old weed eater, why do they call it a weed eater, I broke it. Welcome to the mountains, Pat!

Don’t stress it. Address it!

Tackle it. Get a plan.

It was time for a pow wow!

We needed a strategy, so we moved to the back porch to formula our game plan. The vastness of our responsibility hit me again. There was no path to the back of the property, just weeds and plants with roots that grow all the way to China. We sipped coffee, thank you, Lord for coffee. And we planned. 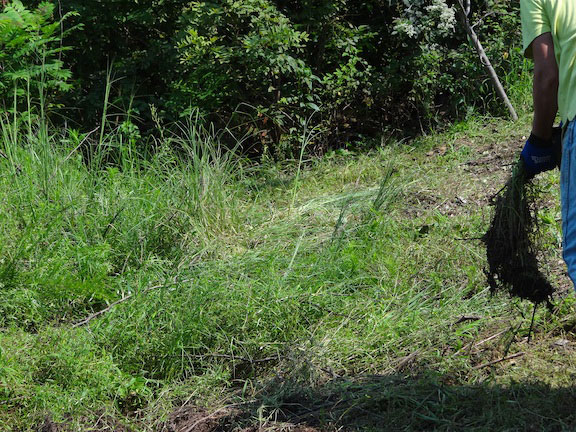 We would hire some help. That was an encouraging thought.
We would check the warranty to see if the weed whacker was still under warranty. It was!           Praise God!
We would tackle the easiest part first.

Hope and a good plan energized me.

We are a good team and we really work well together. The drive way was done in about 30 minutes. We could check that off and having one thing done encouraged me to tackle another area. We concentrated on one area at a time until it was completed. The side yard wasn’t too tall, that would be next. We could check that off. Things were looking better.

Wayne, brought perspective to the patio.

That was the area that had sucked my energy the day we arrived. Wayne, said, “Baby,” that’s what he calls me, I’ll always be his baby, “The patio is not that bad. See the roots are in sand. We can have this done in 30 minutes.” So we worked our way across the patio. Pulling and piling the grass into the wheel barrow. While it wasn’t a 30 minute task, it wasn’t as bad as I thought it was either. Within a hour, maybe a little longer we had that patio clear. A project that took about an hour had sucked my energy two days prior. How did I let it do that? But I did. That accomplishment energized me for the next. I was ready to tackle the world, better known as the jungle down the slope of my backyard. 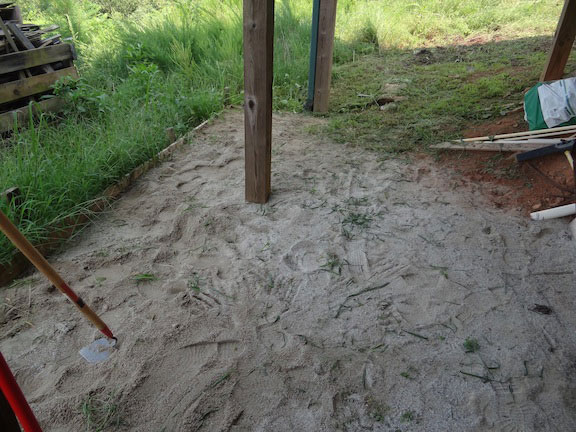 Wayne and I sprayed our ankles with bug spray, pulled long pants over tall socks and clopped outside with big boots to cut down the jungle. When our help arrived, the men cut and I pulled the brush into piles so they could come back and cut farther down the hill. WE did it! At least as much as we had planned to cut on this trip. We reclaimed the jungle!

I shared my story with you for a reason.

I realize we all have things that overwhelm us. Whether it is a new project at work or cleaning out that garage that you’ve been putting off until the door won’t shut any longer. Sometimes it something as simple as a kitchen full of dishes when I have a list of other things to do. When we are overwhelmed, our energy is drained and we just stand and glare at the project glassy-eyed or hide in front of the TV with a bag of chips. Out of sight, out of mind is true. But that doesn’t get the project off our list, it only wastes time, our most valuable commodity.

Because I survived retaking the jungle I offer the following suggestions if you are feeling overwhelmed.

Get a grip on your attitude.

Don’t look at the whole project. Look at one small step of the project and begin there. Talk to yourself. Set a reward for yourself at the completion of the task.

You’ll never finish, if you never start. However, small it may seem, do something toward accomplishing the task. You may need to set a timer. I’ll work on this project for one hour. I’ll clean this one corner and then stop.

We did it and so can you! Don’t be overwhelmed and don’t whimp out in front of the TV with that bag of fattening chips–you can do it.

What is or has in the past overwhelmed you?

What did you do to over being overwhelmed?

I need a big favor.

If you liked this blog will you share it with a friend. It’s easy just click on one of the links below. I’m asking God to expand my reach and often He uses people. Will you be one of those people He uses today?

2 thoughts on “Overcoming That Overwhelmed Feeling”