Skip to content
Home » Love » Say It with Flowers. The Fireweed’s Secret.

Say it with flowers is more than a clever florist mantra. From the lowly dandelion all the way to the brightest red rose they say “I love you”, when they are given to us by someone special. My camera is always full of flower pictures, but the fireweed, yes, it is a weed, is one of my favorites. Maybe, it is my favorite because it has a secret that is important to you. Why is the fireweed’s secret important to you?

Maybe you prefer to listen to this teaching. Click below to listen.

Is the fireweed’s secret really important to you?

If you’ve ever felt ordinary, unseen or unloved then it’s secret is important to you.

Or maybe you struggled with feeling forgotten or misunderstood, then this secret is for you.

This secret is for you, if you’ve ever felt broken, alone or not good enough.

The secret is not the fireweed’s legend…

but its legend is fascinating.

But not the fireweed.

The fireweed buds open from the bottom most part and progress up the stem until the very last buds open. The Alaskans watch the beautiful, fiery blooms believing that as the last buds open and bloom summer will be over and winter will arrive soon. 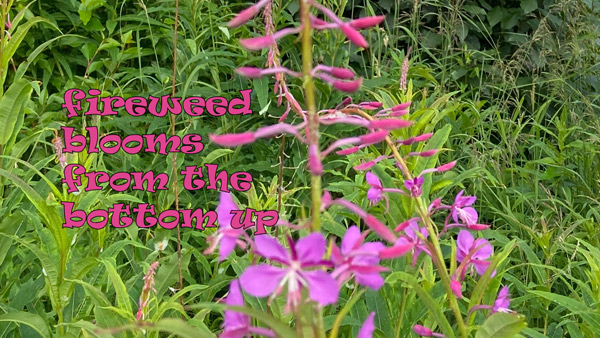 The saying goes “When fireweed turns to cotton, summer will soon be forgotten.”

The secret is not its name…

but I was surprised when I learned the source of its name.

I assumed the fireweed was named for its fiery, fuchsia color. The color really pops against the lush green foliage. But it actually gets its name because it is the first plant to show up after an area is cleared by fire.

Because these plants grow in many different countries and some of the people have vivid memories of areas covered fireweed after air attacks and bombing devastated areas. They felt the fireweed was a reminder of the terrible bombing. These magnificent blooms became an emblem of death and destruction to some people.

But not the Alaskans

They feel very differently about the fireweed. Even though the weed flourished in areas left after a fire, they see the beauty and more.

They love the weed.

Literally love it! They eat the fireweed honey. They make jam from the blooms. And even the tender leaves of the young fireweed plant go into salads.

And they watch the flower like some watch a clock or a calendar, to see if it’s forecast will be correct.

But it is a secret,

Is connected to the fact that the fireweed is the first plant to arrive after a fire.

I’m convinced the fireweed is a glorious herald of hope.

I believe those fiery fuchsia blooms are announcing “Listen. God has something to say to you. “I care about your pain” and He is saying it with flowers.”

“I love you” and He is saying it with flowers.

Isn’t that what we do when we want to show we care?

We say it with flowers. I think we learned that from God.

The fireweed is a visual display that says in the midst of destruction I want to restore hope. It is a truth that we read again and again in Scripture.

Hosea 2:15a BSB “There I will give back her vineyards and make the Valley of Achor (trouble or disaster) into a gateway of hope….”

Why is the fireweed’s secret important to you?

No matter what has happened to you,

God is with you and He loves you.

Every time you see a flower

any kind of flower from the lowliest, pestiest dandelion to the spectacular fireweed, remember, consciously remember…

God loves you and He says it with flowers.

Fireweed grow in cracks in sidewalks and patches beside ditches of the concrete jungles we call cities. God is saying “I love you” and He is saying it with flowers.

They grow along the fence lines of schools and prisons, God is saying “Let me help you” and He is saying it with flowers.

One was found growing on a chimney top
I think that little guy was trying to “shout it from the roof top” and it was God’s megaphone and it was saying “I love you.” He is saying it with flowers. 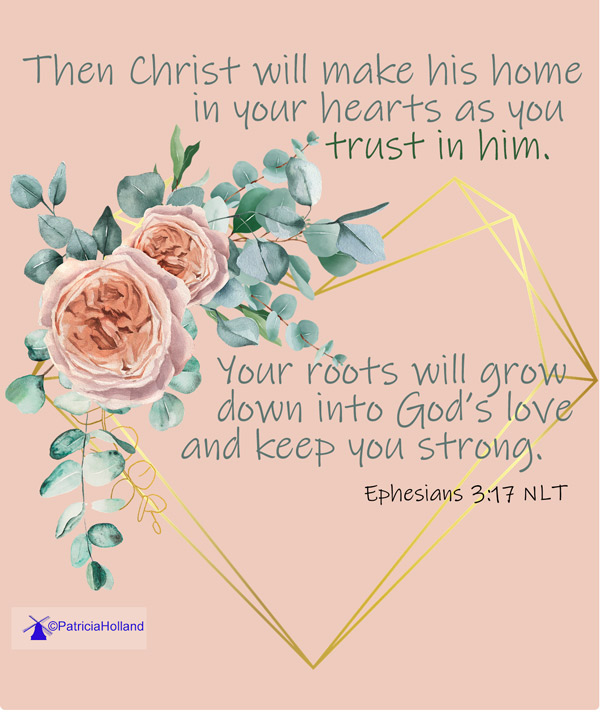 Eph 3:17 NLT
Then Christ will make his home in your hearts as you trust in him. Your roots will grow down into God’s love and keep you strong.

The secret of this beautiful, fiery, fuchsia colored flower is not its legend, not its name, but the reminder that God made the flowers simply because they’re beautiful. Their beauty brings us joy. All the way from the lowly dandelion to the glorious fireweed God is saying “I love you” and He’s saying it with flowers.