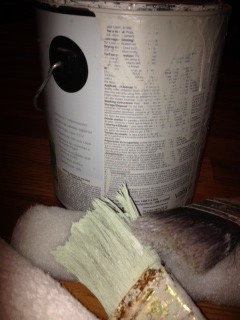 It should be against the law for me to paint anything, because I make such a mess. And I’m simply not qualified to paint.So don’t call me when you need something painted.

That being said, I’m still the painter in the family. I just use plenty of drop cloths, tape off everything and use a pile of clean up rags. But the fact remains, I’m no painter and I know it.

However, some people don’t seem to realize that they are simply not qualified to paint. One point of reference is the dear, good intentioned, probably…sweet little Ms. Giménez. Clearly, everyone that dares to gaze upon the aftermath of her attempt knows without a doubt Celia Giménez’ needs to find a new hobby.

What was she thinking?

I’m no mind reader, but I wonder if her thought process, if there was one at all, went something like this.

“I own a paint brush. I’ve watched a few episodes of “The Joy of Painting” by Bob Ross. Looks easy! I know there a bucket or two of paint in the basement.”

Maybe she had a success under her belt such as… “I painted my wall one time.”

Sometimes a person can have too much self-confidence!

Maybe it was at that point she picked up her pom poms and declared right out loud, I can do it. I can DO IT!

Honestly? Did she really think she could do it?

Obviously, she thought she could, or she wouldn’t have tried it.

My question is, why?

Why did you do it, Ms. Gimenez?

Didn’t you think about what was at stake here?

Undoubtedly, she had confidence in her ability. I wonder at what point she realized she was in over her head. At what point did she see something really horrible was taking place. It doesn’t take an expert to know she was simply not qualified to repair the  hundred year old “ecce homo” (Behold the Man) fresco of Jesus, that hung in a Roman Catholic Church in Spain.

Now instead of a magnificent fresco, the church is left with a repulsive and grotesque painting that gives me the hebejebes. While we don’t know what Jesus looked like, this painting doesn’t even look like a man. Sad. Really SAD! The painting is ruined, because she took on a task beyond her abilities.

So pay attention, know your limits. Just because you own a paint brush, doesn’t make you an artist. While there is something to be said for DIY projects and learning to do new things, there is a basic rule to remember, “Practice on your own stuff first.”There’s a lesson here.

I’m not bashing good intentioned Ms. Giménez’, honest, that’s not my intention. My purpose in sharing this unbelievable story is a lesson beyond a lesson.

Like Ms. Giménez, too many people, thinking they are qualified to do so, have tried to paint over the picture God gave us of Jesus.

Some have repainted Christ in bold, vibrant colors as a sage and philosopher, as a thinker and social reformer.

Others have repainted Him in earthy hues of browns and greens as a good man that lived long ago.

But they are simply not qualified to paint Him for us, because they don’t even know Him.

Too many people don’t realize that.

They believe what modern culture has painted for them. And because of that they never know how wonderful He really is.

It happened long ago, on the streets and corners of Israel, when Jesus walked there.

They had their opinion.

others shouted angrily, because they believed He was a deceiver.

Scriptures gives us a ringside seat to Jesus’ triumphant entry into Jerusalem riding on the back of a donkey, followed and surrounded by a huge crowd of loud, excited people. They called Him him King.

Did they get it?

Not really, because He was so much more than a king.

Matthew 21:10 When Jesus entered Jerusalem, the whole city was stirred and asked, “Who is this?”

Look carefully at their answer. 11 “The crowds answered, “This is Jesus, the prophet from Nazareth in Galilee.”

They knew the details.

They knew His name.

They knew where He lived…

but they didn’t know who He was.

To them He was a voice from God, a prophet…

but not the Messiah.

They didn’t get it either.

Luke 9:18-20  takes us to a private prayer meeting. Jesus is asking the questions.  Conversation grew quiet and Jesus, asked them. “Who do the crowds say that I am?”

One piped up, “John the Baptist.”

Another chimed in, “Elijah.”

Still others added names of prophetic voices from the past to the existing list.

I wonder if he paused before he asked the next question. I think He must have looked carefully for expressions that spoke louder than their words as He framed the clincher,

And He was and is the Messiah, the One sent from God to save us from our sins.

In spite of the broad strokes humanity has used to repaint Him and reduce Him to a mere man or even a great political reformer, He remains the Son of God.

That fact can not be diluted. John 14:6 “Jesus told him, “I am the way, the truth, and the life. No one can come to the Father except through me.”

His question rings and echoes across the hills and valleys of time to query you, “But what about you?” he asked. “Who do you say I am?”

I wonder if He still leans in to listen closely and to see your face when you reply.

Shoulder shrug and too often people answer with still another question, “Does it matter who I say Jesus is?” It is an answer- but it’s the wrong answer.

And yes, it matters, because He is still the only way to come to the Father.

He is the only way to be saved from the penalty of sin.

The question “Who do you say I am?” still has only one right answer…you are the Christ. 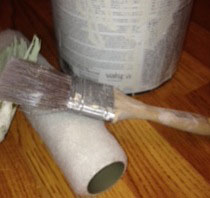 The paint brush in the hands of so many amateurs started out as a tool to white-wash the sins of humanity. They painted to cover their sins and build self-esteem.

They painted with bright hues to feel better about themselves.

Then humanity got bolder as they moved farther and farther from the light of Truth and God’s Word. So bold in fact that they have tried to redefine who Jesus is.

Distorted and disfigured pictures, that rendered Him powerless or at the very least weak and frail.

They painted a picture that reduced God to fit in their little frame.

Just a picture created to fit their little space reserved for religion.

And they’re simply not qualified to paint someone they’ve never known and know nothing about.

2 Tim 4:3-4 3 For a time is coming when people will no longer listen to right teaching. They will follow their own desires and will look for teachers who will tell them whatever they want to hear. 4 They will reject the truth and follow strange myths.

But maybe you responded as quickly as Peter, good ole, bold, brash,  Peter, who’s always got something to say. He said it, “you are the Christ.”

I love that man, he’s one of the first people I want to meet when I get to heaven.

Who do you say Jesus is?

Your opinion, doesn’t change who Jesus is, but it will change your capacity to experience His fullness.

Have you experienced Him first hand as Savior?

Do people see Jesus in you?

Is that picture faded or clear?

One last thought, a picture is unnecessary when the real is present.

So take Jesus to work with you,

to school with you

and Hallelujah! Shopping with you!

And when you take Jesus with you, the world won’t need a picture, because they see Him in you!

God bless you with peace and joy as you follow hard after God!