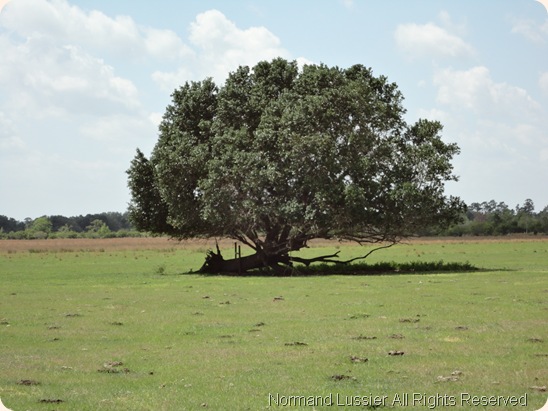 The shortest route and his all too frequent business trips took Normand down the same road, past the same houses, past the same ponds and past the same trees. But one day Normand noticed a strange looking tree. He felt that there was a message in the tree, but he didn’t stop.

After a while of persistent reminders, Normand stopped long enough to take a picture, no doubt it was a strange sight. One that I probably would have never even noticed. Maybe he wouldn’t have either, but God had something to say to Normand.

If you look closely you’ll see that the tree had experienced a terrible storm. Maybe it was one of the hurricanes that had stomped through that area, leaving a trail of devastation. Maybe it was a really bad thunderstorm or a sudden twister, but regardless of what the storm was called it knocked that massive tree completely down. The tree thundered to the ground, tree limbs crashed and shattered and scattered and withered and died. Most of the roots were uprooted, exposed to dry and die in the hot, southern summer heat.  Only one limb survived the crash, soon it began to show signs of death. First the leaves withered and dropped and then the limb completely died of malnutrition.

The massive trunk of the fallen tree was down, but it wasn’t dead. It had roots that went deep into the ground. Those roots were bringing nourishment to that fallen tree and it began to grow new branches. Branches and limbs that turned upward, reaching for the sun! Erect limbs, strong limbs, full and lush like the original tree. When I look at the tree, I don’t hardly even see the trunk that still  lays prostrate on the ground. I see the beauty of a lush tree, sprawling branches that produce a haven for wild animals. A place where cows can escape the glaring sun and ruminated in its shade. It might have been taller if it hadn’t been knocked down by a storm, but the fact that it endured the storm and thrived afterward is a message that surpasses just being tall.

As Normand studied the picture, God gave him a precious message. Sometimes trouble comes that absolutely knocks you down to the ground. Sometimes storms so furious hit our lives that they would absolutely destroy us, except for one thing–there are some roots still in the ground. And for a believer those roots are rooted deep in the Word of God and the love of God. Those roots bring life and hope. Those roots bring nourishment and peace. Those roots bring encouragement and strength. And as that life flows into the trunk, the tree begins to grow. It’s so gradual no one, except the tree even notices. It’s even too slow to be captured on one of those time-lapse videos. It’s slow, but that tree is growing and it’s growing toward the sun.

I don’t know what has happened in your life. Maybe you’ve been knocked down so hard, that it knocked the breath out of you! Maybe it stripped you of all the beautiful things in life and you feel absolutely worthless. But that tree is a reminder, you may be down, but you’re not out– if you stay rooted in the soil of God’s Word and love! It may not be the same as before, but it can be even better. Normand passed hundreds of trees that day, but he only took a picture of one tree, one tree that not only survived the storm, but thrived after it. And so can you. You may be down, but honey, you’re not out! And you will grow again.

Maybe you’re thinking, even my roots where shattered in that storm…I don’t know if I can trust God.I don’t know if I even believe that stuff anymore. My precious friend, as lovingly as I know how to say this, STOP IT! Don’t go down that road. There’s quicksand in the paths of those thought patterns. We don’t understand the why, but I can tell you, never, never for one second has God deserted you. He is with you and He wants to help you in this dark time. If your roots have been shattered, then I want to tell you…grow some more. Get in the Bible. OK, I don’t mean literally try to get in the Bible, what I should have said is get the Bible in you! Read encouraging verses. Skip over the “begats” for awhile and eat some meat from the Scriptures. (I know, I know…even the begats have a purpose, but trust me here, sink your teeth in a promise that builds you.) Declare the truth of those verses over your life, numerous times each day. Declare them and pray them until you believe them. The Scriptures should do more than feed your intellect, they are food for your soul. They should nourish you, but this only takes place when you assimilate them through thinking about them and allowing them to change the way you think.

Thank you Normand for stopping, for listening and for taking a picture! And thank you God for using a tree to remind me that I will grow again, even after a terrible storm.

Daniel 4:26 nlt But the stump and the roots were left in the ground. This means that you will receive your kingdom back again when you have learned that heaven rules.