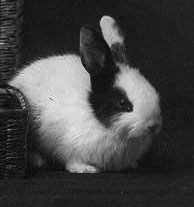 It was a dark foggy, moonless night in the mountains. The headlight beams of his Jeep bounced and jiggled as the tired traveler headed toward his log home. As soon as Jim topped the hill, he spotted a small rabbit in the extremities of his headlights as it shot across the road. Jim slowed his vehicle to be sure that he didn’t hit the rabbit.

The bunny crossed at a blurring speed, reached the edge of the road, then leaped high into the air to cross the ditch that twisted and turned parallel to the road. But in the instant it took the rabbit to leap and while the rabbit was still mid-air, an owl swooped down and snatched the rabbit away in his talons. Not a pretty picture if you like rabbits.

What is that makes a rabbit or a squirrel, for that matter, want to dart across the road just in front of your car? It’s a mystery to me, but it has happened more times than I can count. You’re driving along, minding your own business, when an adorable little creature darts out of nowhere, directly into your path. It makes me ask the proverbial question, “Why did the rabbit cross the road?”  And Wayne answers, “Because he was chicken, silly!”

But look at this picture for a minute. The rabbit was safe beside the road. The grass was tall. The night was foggy. He was safe– until he moved. He was safe until he crossed the road. What drove him from his safe place to the owl’s dinner plate? The bright headlights must have frightened the small creature and drove him from his feeding place to a dinner plate. Fear drove the rabbit from a safe place into a dangerous place.

I’m not advocating moving into a fetal position or into a cowardice hiding place. That’s living in fear. If you’re living in fear, you’re already living in a disastrous place. And you need to take steps to get free from the fear that imprisons you.

God has a shelter for you. I’m not talking about a hide-a-way where the enemy cannot find you. His shelter is not a place of inactivity or immobility. It’s a place of strength, faith and confidence. It’s a bold place. A grace place. His shelter–His house–a place to live–God’s presence.

Psalms 91 describes it for us. Psalms 91:1 NLT Those who live in the shelter of the Most High will find rest in the shadow of the Almighty. 2 This I declare of the LORD: He alone is my refuge, my place of safety; he is my God, and I am trusting him. 3 For he will rescue you from every trap and protect you from the fatal plague. 4 He will shield you with his wings. He will shelter you with his feathers. His faithful promises are your armor and protection. 5 Do not be afraid of the terrors of the night, nor fear the dangers of the day, 6 nor dread the plague that stalks in darkness, nor the disaster that strikes at midday. 7Though a thousand fall at your side, though ten thousand are dying around you, these evils will not touch you. 8 But you will see it with your eyes; you will see how the wicked are punished. 9 If you make the LORD your refuge, if you make the Most High your shelter,

Did you see the description in verse 1; “rest in the shadow of the Almighty.” This rest goes beyond reclining or resting in the shade of a tree. It reflects a state of emotional rest and confidence. Stepping out because you trust Him.

It’s like a son following close in his father’s shadow. When Jason, my son was little, he would play in his dad’s shadow. The shadow was so big, his tiny steps could hardly keep up and stay inside the shadow. In order to stay in his dad’s shadow he had to stay with his dad. No rabbit trails. No running off. No stopping to play in the mud. He had to stay with his dad.

Walking in His shadow is restful, but you are confident in Him. It is living, breathing, and walking in His strength. Luke 17:28 KJV “For in him we live, and move, and have our being ;” It is leaning into Him. Learning from Him, listening to Him.

Exodus 14:10 describes a scene where the people of God start to panic. Now panic will make you do crazy things…crazy things. After spectacular miracles and amazing favoritism sent by the hand of God, the Jewish people stood on the banks of the Red Sea. No bridge. No boat. Not even a detour was possible, because they watched as Pharaoh’s army marched closer and closer. NLT  “As Pharaoh and his army approached, the people of Israel could see them in the distance, marching toward them. The people began to panic, and they cried out to the LORD for help” They cried out to God, but it you follow the next verse, their cries seem to be more panic filled complaints, because next they turned on Moses to vent their frustration and fear. Moses encouraged them with faith filled words. God had a plan.

And He still does. But finding the plan means embracing Him. Living and walking close enough to Him that you can hear His voice and follow where He is leading. Psalms 37:7 NLT “Be still in the presence of the LORD, and wait patiently for him to act. Don’t worry about evil people who prosper or fret about their wicked schemes.”

Don’t let fear drive you from your safe place. Build your faith and confidence about who He is by feeding your Spirit. Let me repeat the instructions from Psalms 37: