Scripture calls them wise, but behind their knowledge was curiosity, a desire to:

I’m not sure which came first;

seeing the star or

I don’t know if the brillant sign in the dark sky drove them to search for the why behind it’s arrival or if the prophecy prompted their expectant sky-watching.

But, the thing that I believe made them truly wise was what they did with the information.

Great knowledge without application doesn’t make you wise, it only makes you proud! Tweet this! 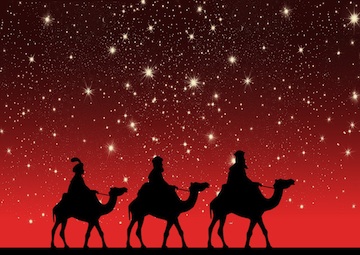 They saw the star!

These men  experienced a defining moment in history.

It stirred their appetite for more;

not a greedy desire, but a deep hunger.

They believed the promise…

not the simple mental nod that so many experience.

They acted on the promise.

Knowing about Him wasn’t enough.

They were too wise for mere knowledge or achievement;

The King of the Jews!

They assumed that any king that was heralded and introduced with a glorious billboard in the heavens would be easy to find.

The obvious place would be a palace.

Royalty belongs in a palace! Right?

But not this KING!

Palaces are inaccessible and intimidating to all except the noble and rich. He came for the rich and the poor. The weak and the strong. The noble and the broken.

Jesus came as a gift to all mankind, wrapped in the scraps of cloth was accessible to the most impoverished person all the way to the wisest of the world! Tweet this!

He wasn’t in the Palace,

because there was no room for Him in a palace.

He was in a stable,

They were at the end of their ability to find the King.

When the wise men had exhausted their natural abilities to find Jesus, God guided them the rest of the way! I love that!

We begin in our strength.

Taking the only steps we know to take, then God partners with our obedience!

They opened their treasures and worshipped.

They came to worship and when they did, they experienced the King of Kings and Lord of Lords.

They brought their treasures and gave their earthly gifts to honor the Treasure of Heaven.

It’s noteworthy to mention the “Who’s Who” on Jesus’s Birth Announcement list.

What a diverse group!

Still they all responded exactly the same.

Worship is the pathway for your love to travel to God.

And, worshippers still experience more than the spectacular.

They get to experience the very presence of God. And nothing, nothing is more wonderful or more life changing than experiencing God! Tweet this!

Don’t settle with only knowing about God;

don’t stop until you find Him,