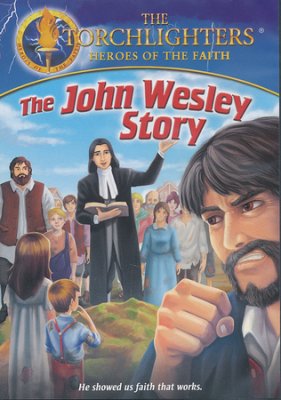 When six-year-old John Wesley is miraculously saved from his family’s burning home,

John prays, fasts, studies, and serves with great zeal. He becomes a priest in the Church of England and helps found the Holy Club in Oxford, a group devoted to following strict Christian discipline and evangelizing prisoners. He even heads to Georgia with big plans to whip the American colonists of Savannah and Frederica into shape and evangelize the Native Americans as well.

But through it all, John finds his faith is lacking and peace elusive. Not only is he afraid of death, but he is also afraid he has missed his supposed calling, especially when his time in America ends in disgrace and defeat after only two years.

Dejected and discouraged, John walks into a Bible study one evening at the suggestion of his friend, Moravian Peter Böhler. Here John’s eyes are opened to a new concept—salvation by grace and trust in Christ. John soon finds the peace he so desires, and his life’s purpose is becoming clear.

But John’s new message is not welcomed in many Church of England parishes, so he joins his old friend George Whitefield in preaching in the open air. This unheard of act further estranges John from the Church of England. With his new message of free grace for all, alongside a continuing commitment to strict spiritual discipline and good works, John’s ministry expands rapidly, bringing much relief to oppressed laborers in rural England. John, his brother Charles, George Whitefield, and others go on to found the Methodist movement, which will flourish both in England and in America.